Gul Khan Naseer is a Ph.D. scholar; doing is Ph.D. in Development Studies. He holds Masters degree in Social Work and Rural Development and has been working as a development professional and human rights activist for last 15 year in different parts of the country and posses a rich experience. He is the winner of International Advancing Leaders Fellowship 2014 for innovative ideas for social change in the world. He envisions an educated, skilled, dedicated youth in the world for a peaceful, democratic, and developed society. He has visited U.S.A twice in 2013 and 2014, organized several events in different districts of Balochistan to aware youth about different national and international opportunities to promote a shared vision. He is affiliated with several social and development organizations as chairman, member of Board and advisory committees. He is founder and head of programs of Azat Foundation. He is also president PUAN Quetta Chapter.

Yousaf Ajab: What is Pak-US Alumni Network and since when it is functional in Balochistan?

I heard about PUAN in 2013 when I received an email from U.S Consulate Karachi about PUAN Sindh & Balochistan Chapters’ reunion at Karachi. Since then I am affiliated with PUAN but PUAN was not very active in Balochistan.

Who and how someone can be member of PUAN?

What are the main objectives of PUAN and how many chapters are in Balochistan?

The Pakistan-U.S. Alumni Network aims to build upon the shared intellectual, social, cultural and democratic values of the people of Pakistan and United States to promote trust and understanding; and contribute towards peace and prosperity of the two countries through exchanges. Our Network focus upon the strengths of the diverse cultures and communities those exist in the two countries; and create linkages by acting as a bridge to enhance synergies on issues of common interest.

The PUAN facilitate individuals and institutions in both countries to enhance recognition and understanding by fostering dialogue, sharing of knowledge and best practices; and mobilizing support for collaboration on initiatives of mutual benefit.  Furthermore PUAN aim to contribute towards improved quality of life of the people, by drawing upon the skills and insights of its members, gained from their interaction with the people of the United States through participation in exchange programs. The Pakistan-U.S. Alumni Network is to examine the social, cultural and intellectual needs of the people and provide platforms of meaningful interaction to promote shared learning and to provide a forum for internal and external networking and sharing exchange program

In the beginning   there was only one Chapter. In 2014 another Chapter was established as “PUAN Gwader Chapter” and elections of all 12 Chapters in Pakistan were held in December 2014.

There are two Chapters in Balochistan:

What is the selection criterion for leadership of PUAN network and who were elected as PUAN Quetta Chapter Leadership last year?

All members can take part in elections, the Chapter’s elections are held after 02 years. There are 04 positions in Chapter leadership: President, General Secretary, Finance Secretary and Youth Group Director. The candidate for Youth Group Director must not be of more than 29 years age. The elections are held in a democratic way, each member can cast his/her vote to the election committee formed by U.S Consulate. 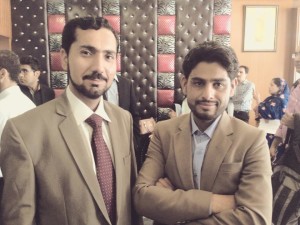 Is your network run voluntarily or funded by some one?

Yes, it is a volunteer network and all members and Chapter Leadership work voluntarily. U.S Embassy and USEFP provide some financial support for small activities e.g. seminars, talk shows, Awareness Walks & Sports events and Annual reunion etc. All Chapters are independent to organize programs with like-minded organizations and Government departments jointly or generate resources for their programs. They can organize programs through members’ contribution as well.

It is said that PUAN is administered by the U.S State Department, if yes so what is the nature of funding and procedure?

PUAN is jointly administered by the U.S. Embassy and the United States Educational Foundational in Pakistan (USEFP).  The network is one of the largest and most active USG exchange alumni networks in the world, with 14,000 registered members and 12 local chapters throughout Pakistan.

Being member of PUAN how can any individual launch or initiate any project with financial assistance of State department/USEFP?

PUAN and USEFP have an Alumni Small Grants program. The maximum funding available is US$5,000 (equivalent in local currency at the prevailing exchange rate). All Pakistani U.S. Government exchange alumni are eligible to apply for these small grants, however applicants must be registered and confirmed members of PUAN. Funding is available for projects that:

Since you have been elected as president of PUAN, what remarkable change has your team brought as compared to past team leaders?

There are more than 300 U.S Alumni in Balochistan but most of them were unaware of PUAN earlier. We have tried our best to encourage all members to get proper membership and actively participate in all activities of the network and fortunately we have made remarkable success in this regard. During last one year we have organized more than 20 activities in 10 districts of Balochistan for the first time. We have organized provincial level campaigns on Women rights, Peace and harmony, Literacy, Tree plantation and youth empowerment with relevant Government line departments and other like-minded civil society organizations. For the first time PUAN has been recognized at provincial level in Balochistan.  Now Chapter leadership takes all the decisions of PUAN mutually in regular meetings through democratic process.

What activities are planned for the next six months and how PUAN members and other youth can take part in these programs?

We have planned our re-union for the first time in Balochistan and hopefully it will be in the current Quarter, all the PUAN members will be invited to participate in the activities of reunion. And other regular activities include celebration of international days, presentations in Universities / Colleges for youth on available fellowships/scholarship opportunities in U.S.A. and a Lincoln Corner is being established in Law College, Quetta, it will be the first Lincoln Corner in Balochistan.

What is a Lincoln Corner and what are its functions?

The Lincoln corners are more than just libraries; they bring the community together to increase mutual understanding. They are classrooms for lectures and workshops to cultivate new ideas and develop new skills. They are theaters for viewing American films and practicing English. They are galleries for exhibiting American and Pakistani artists and musicians. All Pakistanis are welcome to access information free of charge.

Published in The Balochistan Point on January 04, 2016