Despite all claims of improved law and order situation in 2016, it proved itself a worst year regarding poor rule of law in Balochistan.  Balochistan again lost hundreds of precious human lives just because of security lapse. Once again the claims of Nawaz government were rebuffed by themselves. The burning Balochistan remained same as it used to be in the last years.  Governments’ claims for developing Balochistan, constructions of highways and China Pakistan Economic Corridor (CPEC) could not pacify the people who were deprived of their family members.  Most of the attacks were carried out by religious militant organizations, which make doubtful the implementation of National Action Plan in Balochistan.

Balochistan remained under major terrorist attacks in 2016. The religious militants continued their war against the noble cause and attacked on polio workers. On 13 January 2016, a suicide bomber blew himself up close to a polio vaccination center which killed 16 people and injured some 25, mainly policemen who had gathered to escort health workers. The security forces were the primary target of attack, the bombing happened outside the polio center shortly before vaccination teams were due to be sent to local neighborhoods as part of a three-day immunization campaign.

On February 6, At least 13 persons, including four FC officials, were killed and other 38 persons injured in a suicide blast in Multan Chowk area of Quetta Balochistan.

All the claims of government proved ineffective when a huge bloody attack took place in capital city of Quetta, as a suicide bomber killed at least 70 people including lawyers, media men, and civilians and injured more than a hundred at the Civil Hospital in Quetta on 8th August. The blast at Civil Hospital came hours after unidentified gunmen killed president of Balochistan Bar Association Advocate Bilal Anwar Kasi in the provincial capital following which lawyers had brought his body to the hospital. Most of the dead and injured were lawyers, including police officials, journalists and doctors. Jamaatul Aharar, a faction of Tehreek-e-Taliban Pakistan claimed the responsibility and vowed more attacks “until the imposition of an Islamic system in Pakistan.

The bloody attack on lawyers in Balochistan caused loss of an entire educated generation. The slain lawyers included Baz Muhammad Kakar, Adnan Kasi, Arbab Gul Zareen, Sangta Jamldini, Chakar Rind and many others.  Unfortunately, rather than accepting failure and protection of lawyers and civilians the bombing was termed an attack on the China-Pakistan Economic Corridor (CPEC).

Journalists once again become target of the suicide blast, as Mehmood Hamdard Cameraman of Dawn News and Shehzad Khan Cameraman of Aaj TV lost their lives while Fareedullah reporter of Dunya News sustained injuries. More than 40 journalists have also been killed in last seven years in Balochistan. 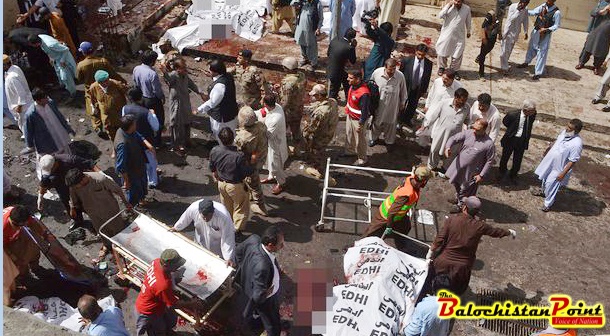 A view after horrific suicide bombing in Quetta hospital on lawyers in Balochistan which caused loss of an entire educated generation.

In the terrorist attack at Police Training College on October 24, 2016 at least 61 security personnel were killed and more than 165 others were injured as heavily-armed militants wearing suicide vests stormed a police Training College in Quetta. According to Home Minister of Balochistan Sarfraz Bugti that three terrorists had entered the Police Training College from the rare gate after martyring a watchman and held 250 fresh recruits hostage, who were present in the college without weapons. Militant group ISIS claimed responsibility of the deadly attack on police academy in Quetta. The attack was carried out by “Islamic State fighters”, the group’s Amaq news agency said.

Poor administration and mismanagement claimed lives of more than two dozen people in an explosion and fire at the Gadani ship-breaking caused death of 26 ship breaking workers.  More than 50 others were wounded in the incident when a gas cylinder exploded and started a fire inside an oil tanker in the shipyard. 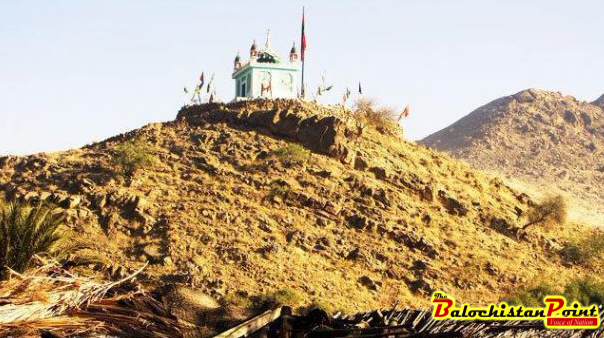 At least 65 people were killed while over 100 others injured when a blast struck Shah Noorani shrine in Baluchistan’s Khuzdar district.

The attacks on polio workers, lawyers and police trainees failed to influence the poor law and order situation in Balochistan or cause any improvement in it. Dozens of people continued losing their lives and poor law and order situation persisted. On November 12 at least 65 people were killed while over 100 others were injured when a blast struck Shah Noorani shrine in Baluchistan’s Khuzdar district. The blast hit worshippers participating in a ceremony at the shrine of the Sufi saint Shah Noorani, some 750 kilometers away from Quetta, the provincial capital of Balochistan. Later the attack was claimed by the militant Islamic State (IS) group claimed responsibility for the attack, according to international news agencies.

According to the Ministry of Human Rights Pakistan approximately 70 tortured dead bodies were recovered from different areas of Balochistan. The government had made public recovery of more than 1000 dead bodies over the past six years. However, the chairman of Voice for Baloch Missing Persons says that they have a number of 1200 regular registered tortured bodies, but their number is much higher. The Baloch nationalists and Human rights activists’ allege security agencies for ‘kill and dump’ of Baloch political activists but Anwarul Haq Kakar the spokesman of Balochistan government called the allegations baseless.

One member judicial commission comprising Supreme Court Judge Justice Qazi Faez released its finding of the August 8 deadly blast targeting lawyers outside the Civil Hospital in Quetta. In its finding published on the apex court’s website, the commission has slammed the callous attitude of police, health workers, Balochistan and federal government in response to the attack.

All the massacres including minor acts of terrorism have caused a great human loss of Balochistan within 12 months just as a result of security failure; as Balochistan has been witnessing such deadly attacks for many years. The earlier and current governments learnt no lessons from the terrorist attacks in Balochistan.

Zero tolerance on lapses to deal with security situation is always heard; however, nothing is considerably done. Lack of seriousness in protection of human lives will give birth to more carnage. Government requires coming up with new policy against talibanisation, and being responsible for security provision of armless citizens, so that it may produce some effective results.

Published in The Balochistan Point on January 2, 2017

2017-01-02
admin
Previous: Overlooked village of Kolahoo Turbat
Next: Five places you must visit in Pakistan in 2017