A tide of protests have swept Pakistan’s southwestern Balochistan after threats from shadowy militants forced dozens of private schools in Panjgur, a district in the province, to close their schools.

The warning of “dire consequences” for private schools 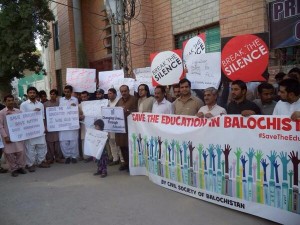 providing “western education” intimidated at least 35 private schools and 30 English language centers in Panjgur to shut their doors on May 7. Government schools in the area remain open.

Chanting “we want education. Education is our basic right. Save education,” thousands, including women, students and leaders from a few political parties marched on the roads of Panjgur. Protestors demanded that the government provide security for male and female students studying in all schools.

There have been similar protests for Panjgur’s students in Balochistan’s capital city Quetta and the districts Naseerabad and Jaffarabad.

The Baloch Hal, an online English news site that focuses on Balochistan and is banned within Pakistan, reports:

These warnings are alarming considering that fact that Panjgur has remained one of Balochistan’s more advanced places in terms of education. A number of private schools run by local teachers and administrators have earned a great reputation for impartial quality education among male and female students in the Pakistan-Iran bordering town.

The previously unheard of militant group “Tanzeem-ul-Islam-ul-Furqan” started distributing flyers in Panjgur at private schools against western-style education “regardless of them being a co-education or an all-girls facility” on 25 April, 2014.  Two weeks later, masked assailants stormed a school in Panjgur and beat up a teacher. A school van transporting female students and teachers was set on fire by gunmen several days later. These events intimidated most private schools to close their doors to students in Panjgur.

In an opinion piece on Baloch Hal called Pakistan’s Boko 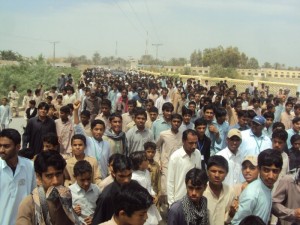 In grand protests joined by thousands of people to fight back against religious extremists, the people of Balochistan have given their judgment: there is no room for Boko Haram in Balochistan. The Pakistani government should now hear the people’s verdict and fulfill its responsibilities.

Pakistan has the second highest number of children out of school,according to UNESCO. Poverty, poor government investment, patriarchy, social bias and religious extremism all play a part. In 2012, Malala Yousafzai was shot in the head in retaliation for campaigning for girls education in the northern part of Pakistan.

In Balochistan, things are different. It is the country’s largest, least populated and poorest province. Baloch nationalists have waged an on-and-off war for independence from Pakistan,  and their fight seems to be at its peak.  Meanwhile, Pakistani intelligence operatives are accused of abducting Baloch men.  Various sectarian and Islamist militias also use the area for recruitment and training to fight wars in Iran and Afghanistan, which border Balochistan, and within Pakistan itself.

The public awakening in the town of Panjgur, on the contrary, has barely received any attention in Pakistan’s mainstream media or the international press. The developments in Panjgur epitomize a rare but organized community-based battle for protecting girls’ right to education. The rise of Islamic extremists in the secular Baloch province, which I had predicted in 2009, is deeply alarming but the local population’s uprising against the detractors of girls’ education simultaneously provides tremendous hope for a community that is being rapidly radicalized by the Pakistani government in an attempt to trade an ongoing left-wing independence movement with radical Islam.

When I was growing up in Panjgur in 1990s, it was absolutely inconceivable to think about giving the clergymen a share in the social and political decision-making process. The role of the clergyman, locally known as the mullah, was clearly defined and restricted to the mosque.”

Teachers themselves are in the crosshairs of this mistrust. Schoolteacher Abdul Hameed and five other members of his family were brutally murdered by separatist rebels on 21 May because they believed he was a spy for the government.

Recently, Hina Baloch, a social commentator who focuses on Balochistan, education and conflict wrote a piece detailing the raid of Pakistan’s security forces at a school in Turbat, a town 220 kilometres from Panjgur:

It is also worth noting that just recently Atta Shad Degree College in Turbat was raided by FC personnel during a book fair. Masterpieces, like the autobiographies of Nelson Mandela, Gandhi and Che Guevera, were brandished by the FC in front of the media – the works were labelled as ‘anti-state’ literature. [..]

Some activists are using Facebook and Twitter to spread the word and garner support. A Facebook page named “Save Girls Education in Baluchistan” was created by a Baloch journalist.

Another Facebook page named “Save Our Girls” and a petition on Change.org also supports the cause.

According to an unnamed official in this report by Abdul Ghani Kakar on Central Asia Online, militant attacks and intimidation have forced 70,000 students to leave school in Balochistan. Kakar quoted Balochistan’s education minister in this report, who said his government has allocated Rs. 61.3 billion (US $62m) to “fix the problem.” He added, “We are taking all possible measures to maintain law and order and to restore the educational system in the militancy-hit areas.” (Courtesy: Global Voices)

Republished in The Balochistan Point on May 29, 2014