Shah Mehmmod Shakib is reading his Persian-language poetry in house of a drawing room situated on Zarghoon road Quetta.

A group of people are carefully listening to him and praising his poetry. In the center of the room is an old man sitting on a wheel Chair. This old man is not an ordinary man but Abdullah Jan Jamaldini, a literary giant, and this is Balochistan Sunday Party.

Abdullah Jan Jamaldini was born in 1922 in, what is now, Noshki district of Balochistan. Mr. Jamaldini quit his job as Naeb-Tehsildar in 1953 to pursue literary activities. He then joined University of Balochistan and retired as an Assistant Professor form the institute in 1986.

He was immortalized by his autobiography which is famously known as Lat-Khana. 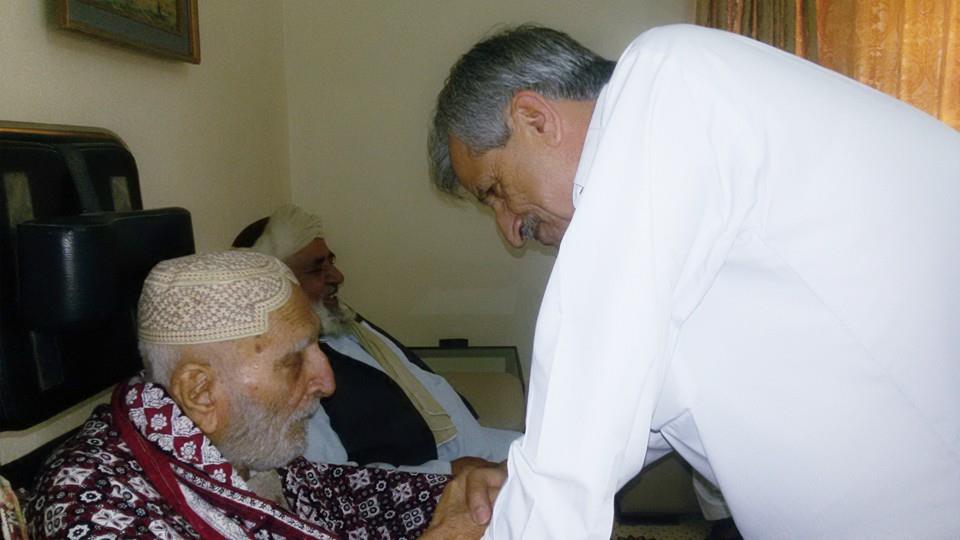 Mr. Jiand added, “Most of the participants in the meeting are regular visitors and ensure their presence in the party on Sundays.”

Participants of the group include people who come to Quetta from Kharan, Muslim Bagh and Mastung, amongst other places, to attend Balochistan Sunday Party and catch a glimpse of Abdullah Jan Jamaldini.

A participant of the gathering started discussion on the topic of religion in politics and this kick started a heated but a rational debate.

After detailed debate on the topic, Dr. Shah Muhammad Marri, a famous intellectual and medical doctor, started his monologue on why religion is destructive when mixed-up with politics. The logical arguments made by Dr. Marri summed up the debate on the said topic.

This is what transpires on weekly basis in Balochistan Sunday Party.

At 1:30 PM the party is concluded and the participants leave after saying farewell to each other only to return next week same place and same time.

Literature 2015-10-12
Editor
Previous: Promoting Girls’ Rights on International Day for Girl Child
Next: No Quota for Balochistan in PSO Jobs