QUETTA: A candlelight vigil was held on Friday night by Organization of Volunteer Youth Quetta (OVY) in the provincial capital to show solidarity with the victims of Gaza in the wake of Israeli onslaught.

The candlelight vigil was organized by OVY in collaboration with Scientific, Education, Elegant & Refined Souls (SEERS) Institute. People from all walks of life, including members of civil society, students, journalists and children participated in the candlelight vigil to show their solidarity with the victims of Gaza.

The participants of the vigil called upon the international humanitarian organizations to stop playing role of silent spectators and play their role in halting the genocide of the people of Gaza. They deplored the mass killings of unarmed civilians which has surpassed the figure of 1000, most of whom are women and children. The speakers also stressed upon Israel to respect the International Geneva War Conventions 1949 and do not target the human settlements.

The speakers said that it was a tragedy that non-combatants like women, children and old age people were not spared and the human settlements were razed to the ground on the lame pretext of countering Hamas and its allies.

Furthermore, the speakers also questioned the role of Organization of Islamic Conference (OIC) and Arab League (AL) vis-à-vis Israel’s ongoing attack on Gaza. They also came down hard upon the neighbouring Arab states in particular and on the Muslim world in general for their silence and apathy for the humanitarian crisis in Gaza.

The participants also observed 30 seconds silence to grieve the killings in Gaza and prayed for peace in that volatile region of the world. 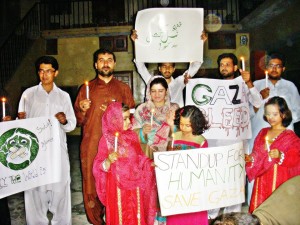 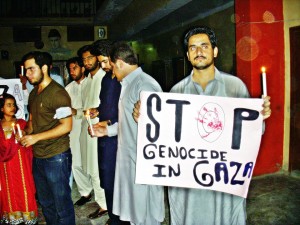 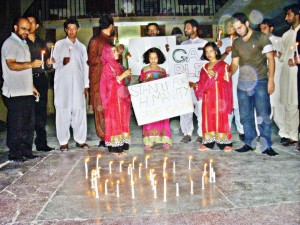 Published in The Balochistan Point on August 1, 2014.

2014-08-01
Editor
Previous: Taboos on the brink: What you don’t know about Balochistan
Next: Three including a women gunned down in Panjgur