Karachi: Baloch Student Education Organization (BSEO) held Culture Day celebrations in University of Karachi this Thursday that began with Cultural Walk from Mahmood Hussain Library leading to a seminar on “Baloch Culture and Civilization” in the Arts Auditorium.

Dr. Monas Ahmar said that every province in Pakistan has a unique history that dates back to thousands of years and no nation can ever thrive ignoring its history and civilization.

Addressing to the attendees, Dr. Monas Ahmar said that every province in Pakistan has a unique history that dates back to thousands of years and no nation can ever thrive ignoring its history and civilization.

Dr. Monas also identified slow process of integration and appalling conditions of infrastructure in Balochistan, the major reasons behind the barriers to broadening mutual understanding between diversified cultures.

Identifying the types of cultures, Dr. Ghafor Memon linked spirituality with humanity, a culture that every civilization has promoted in the history and in present. “Being a core example, Sindhi Department initiated Balochi certificate course that began with only a few students back in 2013, but today more than 180 students are part of the course which further predicts promotion of Balochi Literature and emerging as one of the departments in future,” He explained. 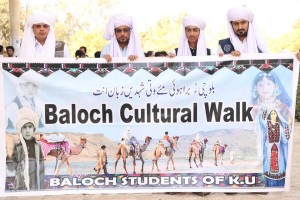 The lecturer of Balochi language certificate course Sharaf Shad encouraged students to be the promoters of their language since it is the key entity and reason behind a nation’s progress.

During his address to the attendees, Dr. Fateh Mohammed Burfat identified humanity the major religion of this world. Any culture can only be promoted when the social change is brought from the grass root level and the next comes the turn of factual development and change that travels toward the higher peaks.

Most guest speakers accentuated to the fact that students from different parts of Balochistan studying in University of Karachi are the first and last hopes for the poverty tackled and underdeveloped province that is in severe need of social, economic and political development. Hence, it is the foremost responsibility of the students to stay centered for educational evolution leading to dramatic change for the future of the region.