Disability is not inability: Miraj Bibi’s determination to achieve her dreams

QUETTA: Heading towards the ‘Safe from the Start’ centre with a hobbled walk, a 27-year-old Afghan refugee teacher is confident and indifferent to the bullies around.

Miraj Bibi was born with a rounded back in Quetta, the north-western city which is the provincial capital of Balochistan, Pakistan. Her spine developed a twist that later affected her legs. Her family moved to Pakistan from Logar, a province in the eastern part of Afghanistan. Her father was strictly against girl education and it was a struggle for her to go to school. After passing her 10th grade, she waited for years for an opportunity to use her knowledge and skills.

In 2017, her mother introduced her to the Safe from the Start project.  A project initially funded directly by the United Nations High Commissioner for Refugees (UNHCR), which is now supported by UNIQLO, the Japanese clothing company.

The project was first run in Quetta in 2016 and targeted 130 women. In 2017, the project has 100 women in the Ghousabad region in Quetta and offers training in kilim making, machine and hand embroidery, stitching and tailoring.

Miraj immediately felt the project provided a safe working environment for her and she was recruited as a teacher at the centre. Over time, she has developed a reputation as a courageous and bright girl, who inspires fellow teachers, management and students.

Miraj recalls her struggle to get an education. She gives a lot of credit to her mother, who played a vital role in convincing her father to allow her to attend school. She recalls that when she passed the 5th grade she was not able to immediately continue with her studies since she was considered an old girl by her father. He strongly believed that girls should be confined to a domestic life, like many other men in the community and that a girl going outside of the home brings shame to a family.  When her father got a job in Peshawar she took the opportunity and continued with her education. Her mother’s support was important, but she also received support from her teachers, brothers and neighbors. 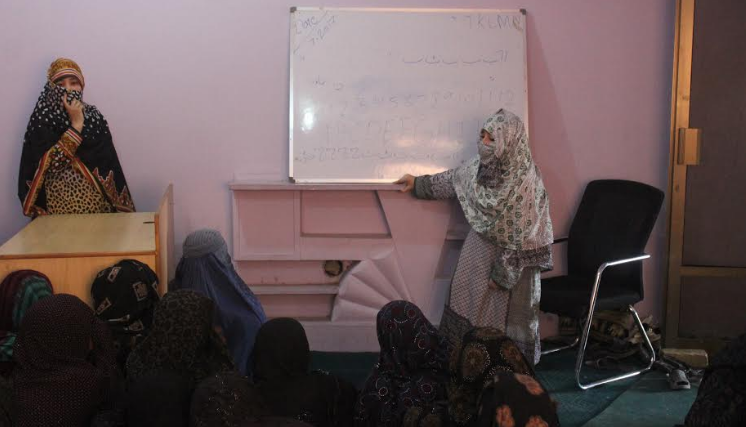 Miraj is teaching in her class at Safe from the Start centre in Quetta.

Her life took another turn when she passed the 9th grade. Her father lost his job and came back. He was furious that she had continued to go to school in his absence, however Miraj was able to complete 10th grade, but at home. She was helped by her teacher and classmates who provided her with books and notes. She passed her 10th grade exams in 2007.

While wiping away her tears, Miraj recalled that her father followed the tradition of his father and enrolled his sons in a well-known English-medium private school.

Between 2007 and 2017, Miraj spent her time at home reading books and learning new things – she particularly liked English learning guides. She started tailoring and embroidery work to earn some money. Her father fixed her engagement with a relative, but the family refused the offer of marriage because of her physical condition. Later, her mother refused a marriage proposal for her because she did not want Miraj to suffer violence for being unable to carry out domestic work expected of women.

She eventually convinced her father that because she could not marry he should allow her to stand on her own and live her life.

She is now serving as a teacher at the Safe from the Start centre. She showed her first salary to her father with pride that she could earn and contribute to the family. Miraj says that after this her father greets her properly when she enters the home. This fills her heart with immense happiness and pride. Her father says that he spent a lot of resources on his sons, but his daughter made it on her own.

Miraj now plans to study at a higher level.  She knows that her spine condition can be cured in Karachi, but right now this is beyond what she can afford.  She is determined to achieve her dreams to be an independent and useful member of society and will not let her physical disability get in her way.

Published in The Balochistan Point on December 6, 2017