Dismal State Of Education In Balochistan: 1.8 Million Children Out Of Schools

QUETTA – 1.8 million children in Balochistan are out of schools disclosed, Sardar Raza Barech, Advisor to Chief Minister (CM) of Balochistan on education, on Monday.

Mr. Barech made the revelation while speaking at a program titled “Education Governance” that was organized by Mishal Pakistan in Quetta Press Club. 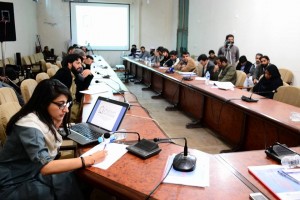 A scene of the meeting

“1.1 million Students are admitted to primary schools and only 50,000 of them make it to Matric,” added Mr. Barech.

Chief Guest painted a very dismal picture of the education in Balochistan as He said “Literacy rate among females is just 19% and among males is less than 50%.”

Admitting the political influence exerted by different groups, He said that changes in education are not easy to bring about.

Advisor to CM failed to properly answer tough questions asked about issues such as high NTS test fee for education department vacancies. He declared ignorance about the matter when asked about threats to girl’s college in Gwadar.

Others who spoke at the occasion include Abdullah Jan, Secretary Information of Balochistan government and Raza-ur-Rehman the President of Quetta Press club. Puruesh Chaudhry, Director of Aagahi, was the hostess of the meeting.

Earlier in the meeting, Miss Chaudhry presented a presentation on the topic of “Government and Media partnership to enhance accountability.”

Meeting was attended by several journalists and other media persons.

Published in The Balochistan Point on January 12, 2015