Quetta: Dozens of M.Phil scholars have been unable to complete their research due to the non functional Chemistry laboratory at Sardar Bahadur Khan Women’s University, while they have been asked to pay late thesis submission fee, as charged Rs 4000 monthly.

If the situation persists not only the M.Phil researchers of Chemistry will remain unable to complete their research on time but also students from other science subjects.

According to the sources currently there are more than two dozen scholars from last two batches of 2013-2015 and 2014-2016, whose researches have not been concluded as due to the lack of chemicals, glass ware, instruments and other facilities.

One of the M.Phil scholars told, “We completed our course work on time with good grade and CGPS  just in a  year in 2013, conversely, by reason of the non functional chemical lab we have been unable to carry our research work.”

“Several times we requested Vice Chancellor of university to resolve the issue and take tangible measures but she justified that the head of department and dean had been funded for the reason to functionalize chemical labs and provide all the required materials which can help in research work.” She disclosed.

A professor from another university on condition of anonymity said, “It is very difficult for any chemistry student to precede her/his M.Phil research without scientific equipment and compound.”

He said, “Scholars from SBKWU, who research under our supervision, they have opportunity to use labs in our university but it costs thousand of rupees if they use any private lab and chemicals.” 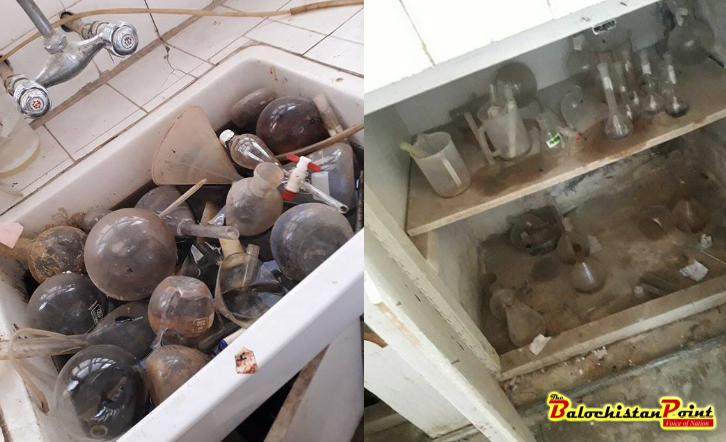 Another student from batch of 2013, said: “Our all research hypothesis are related to science which we need to prove using chemical and scientific materials but we have been confronting hardships due to no support from administration.”

“Our research period is going to complete four years and now we have been asked to pay late thesis fee, as charged Rs 4000 monthly from March 2016, which we are unable to pay. We hardly bear our educational expenses.” She added.

She said, “We are poor residents of Balochistan coming from far flung areas, therefore, if our university administration cannot smooth the progress of our research work, at least it should   waive off charged fee till completion of research period.”

Academic staff member from Sardar Bahadur Khan Women’s University on condition of anonymity said: “No doubt, Students have been facing difficulty in no existence of laboratory equipment but recently the lab materials were tendered and now the technical evolution is in process. After supply orders, everything will be accessible for scholars to continue their research.”

Published in The Balochistan Point on January 27, 2017