Editorial: Not the Words but Actions Required in Balochistan 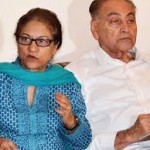 and member of Human Rights Commission of Pakistan Asma Jehangir said that there are continuing reports of serious human rights violation, enforced disappearances, torture and extra-judicial killing in Balochistan.

After her visit to Balochistan, in the press conference Asama Jehangir said that sectarian militants operated with impunity and carried out reprisal attacks against state institutions. “There were continuing reports of serious human rights violations, enforced disappearances, and torture and extra- judicial killings in the insurgency-hit province” Said the human rights defender.

The HRCP team press conference somehow mirrors worsened law and orders situation, yet Balochistan requires significant attention. No doubt, only reporting human rights violation is not solution to any problem. However, there is great need of action not the words.

Undoubtedly, HRCP and other human rights organizations have been reporting human rights abuse in Balochistan but no tangible measures or reduction in the violence reported.   We witness rapid increases in recovery of bullet-riddled dead bodies, enforced disappearances and military operations in Balochistan.  Even when the H.R.C.P team was visiting Balochistan, seven young Bugti tribesmen were picked up and their dead bodies were recovered.

In short, The H.R.C.P. has remained very active in exposing systematic ‘Kill and dump’ of Baloch youth and political activists; nevertheless, it is need of the time H.R.C.P including human rights defenders should stand against  the illegal practices in Balochistan, allegedly applied by the Pakistani security forces in the restive province Balochistan. Since reporting violence cannot be of any use unless there is action to naturalize claims.  Balochistan requires revolutionary like acts against human rights abuse by the champions of human rights defenders; however, reporting violence cannot change the minds of perpetrators. The human rights Organizations have to conduct processions, long March, and other democratic tools of protest to urge state to ensure the protection of common people.