GDA School Crisis: Who is at Fault?

Gwadar – A crisis at Gwadar Development Authority (GDA) Public Higher Secondary School lingers on as opposing parties blame one another.

GDA School is the largest school in the port city of Gwadar. It was established with an investment of Rs. 50 million and receives over Rs. 3 million in grant annually.

Students and a group of lecturers of GDA School protested for the third time on Wednesday and demanded for dismissal of the principal.

Students and lecturers of GDA School protested for the third time and demanded for dismissal of the principal.

Appointment of the new principal, Colonel (retired) Saeed-ur-Rehman, in June this year sparked the crisis.

After assuming office he terminated employment contracts of lecturers serving in GDA School. As a result protest started against the principal from mid august onwards.

On 17th August, employees of GDA School protested against the attitude of Principal. Again on 8th September there was another protest and boycott of classes by the students. On last Wednesday, Students and again boycotted the classes in protests.

Each and every time GDA administration assures the protestors that their problems would be resolved but no action is taken on their demands.

Students blame that Principal along with a group of his favorite lecturers is destroying the environment of the institute.

“Unjust policies, misconduct and lobbyism of Principal and his cronies has led the dream of a model school [GDA School] into a destructive school,” a protesting student told Balochistan Point. 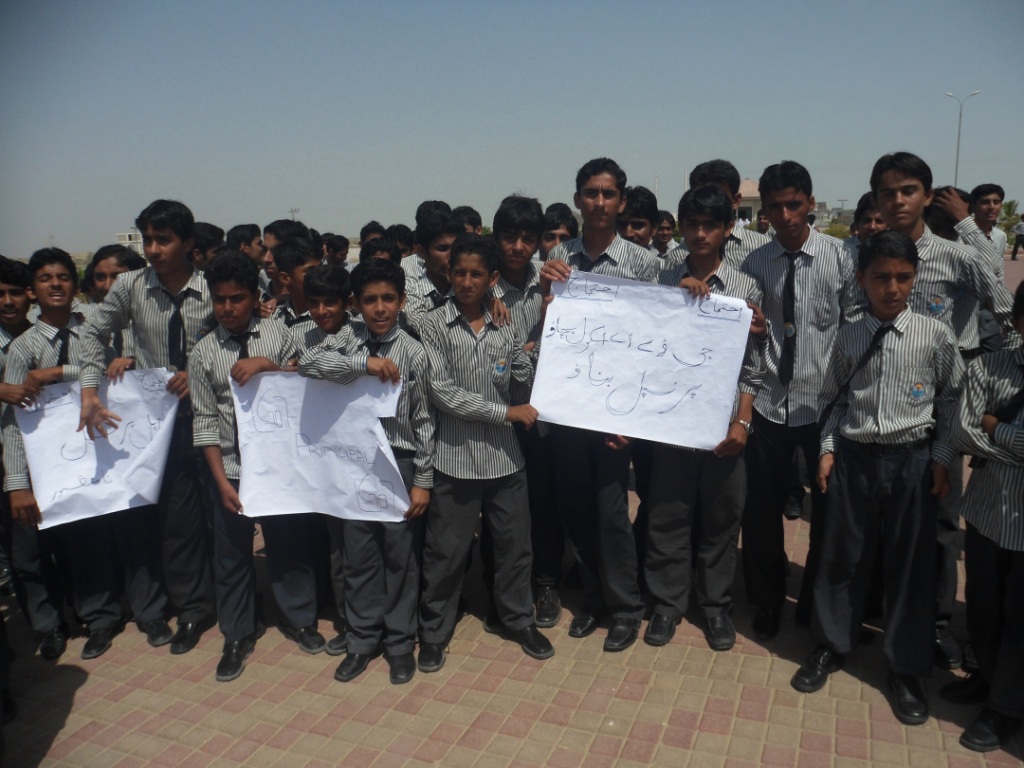 Unjust policies, misconduct and lobbyism of Principal has led the dream of a model school into a destructive school – protestors.

“A group of four lecturers with the support of the principal execute plans to offend and insult our hardworking lecturers,” added the student.

Protestors blame that lobby of lecturers supporting Principal includes the lecturers whose subjects are the ones mostly failed by the students such as chemistry  teacher of 9th and 10th classes and computer science classes of 6h and 8th classes and so on.

Incompetent lecturers lobby for Principal have strong support from GDA main office and therefore no one can take action against them, whereas the lecturers whose performance is remarkable are either terminated or compelled to resign,” lamented another student.

The students told The Balochistan Point that they had left their previous schools just with the hope that GDA School would prove to be better for them but it has rather been very disappointing.

If principal and his lobby is not terminated then protest will continue indefinitely – protestors.

Students warned that if the principal with his lobby is not terminated, they will continue their protest.

“Main reason behind the ongoing crisis in GDA school is that a group of lecturers is not prepared to perform regular duty as demanded by Principal,” Mr. Shay Mansoor, Assistant director (Admin) GDA told Balochistan Point.

Mr. Shay Mansoor rejected the allegation that Principal of GDA is discriminating with local lecturers of the school in any way.

Mr. Mansoor however conceded that Principal of GDA School is not aware of the social dynamics of Gwadar and that’s also a reason behind the ongoing crisis.

Principal of GDA School is not aware of the social dynamics of Gwadar – GDA official.

Principal of GDA School completely refused to comment on the matter. He threatened the correspondents of news channels to call the police when they visited his office to take his comments on this matter.

The main cause of ongoing GDA school crisis is that some officers within GDA are using students and lecturers to settle their own scores,” Sadaqat, a local journalist from Gwadar told Balochistan Point.

He further continued, “Local politicians, of Balochistan National Party (BNP), Jamat-e-Islami (JI) and National Party (NP) are creating an issue of local vs. outsider in Gwadar and GDA school crisis is a consequence of such efforts.”

People of Gwadar have demanded from Balochistan government to investigate the real cause of the school crisis and ensure that all problems are solved and educational activities in school are resumed.