Quetta: Saeed Ahmed,28, was one of the toppers among National Testing Candidate’s for teaching posts in Union Council Chatkan of Panjgur district, in 2015. Allegedly he was refused to be posted as a teacher, due to the non-availability of vacant post at his UC. This did not happen only in district Panjgur, however, almost in all districts of Balochistan various toppers in UCs were refused to be given their rights to be appointed as a teacher. The denial to almost 332 candidates resulted in peaceful protests in all districts of Balochistan.

The protests continued for more than twenty months in different districts of Balochistan and later they set a camp in front of Quetta Press club in 2018, demanding justice against merit.

The nonviolent protest could not get attention of Balochistan government. It not only resulted hopelessness among the NTS pass candidates but Saeed Ahmed committed suicide by burning himself in Panjgur Bazar as a protest on 5th September 2018, against injustice. Later burn injuries caused his death in a week.

On 30th November 2014, some 4259 vacant posts of Junior Vernacular Teacher(JVT), Senior English Teacher(SET), Junior English Teacher(JET) and others were announced through NTS, the applicants paid Rs 1000 for each post and nearly 93000 applications were submitted. Through this estimation the level of unemployment can be measured in Balochistan. 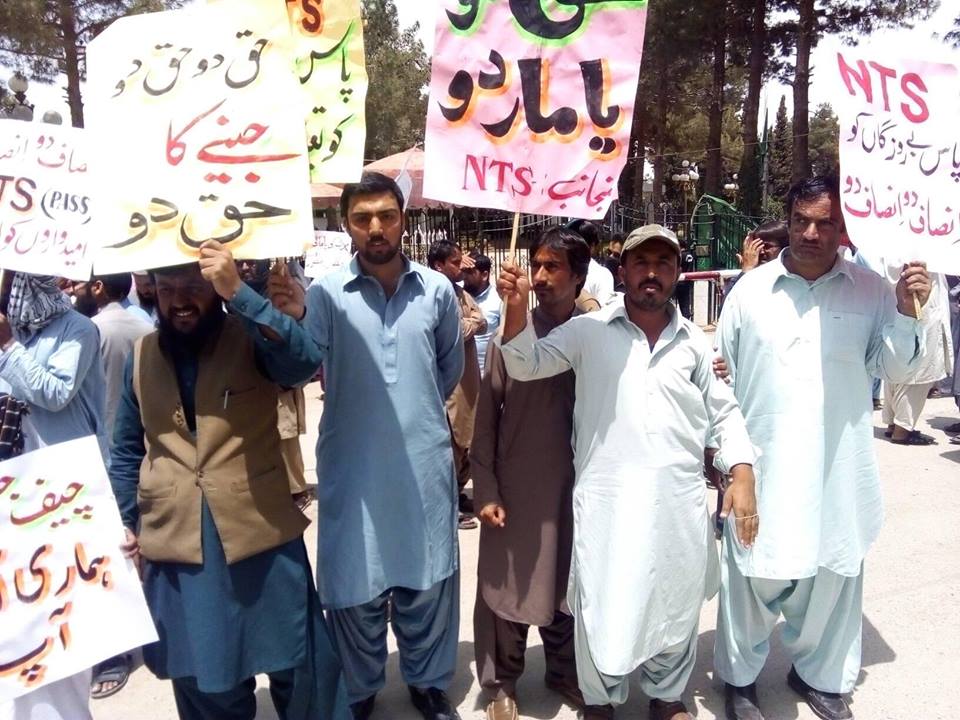 NTS toppers protesting for their right

Tanweer Baloch one of the members of All Balochistan NTS Youth Action Committee told the scribe that the eligibility criteria for candidates was conditioned on UC base, however, more than three hundred toppers in different UCs have not been appointed. The NTS candidates, appeared in the tests on UC level but later they were not appointed.

“In order to adjust their favorite candidates, the district authorities had concealed posts and a limited number of vacant posts were announced in the newspapers.

And later on the name of DRC and CRC many fake and favorite candidates were appointed through illegal way,” Tanweer Baloch alleged.

Muhammad Khalid, another active member of All Balochistan NTS Youth Action Committee told that they had postponed their protest on assurance of Chief minister of Balochistan Jam Kalam Khan. “We were guaranteed that our concerns will be removed within two or three months but now one moth has completed but no development has been witnessed in this regard.”

Muhammad Khalid claimed that NTS candidates had number of proves where the appointments were against the merit and the candidates with low marks were posted. There seemed complete violation of merit in all the districts of Balochistan. 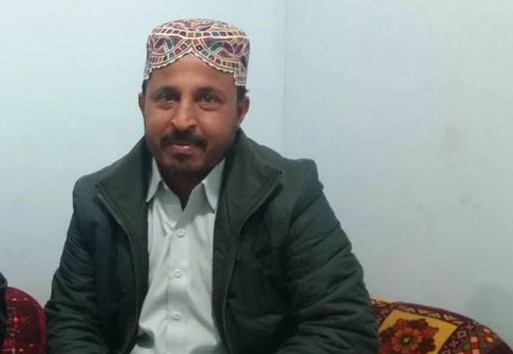 The office bearers of NTS youth Action Committee demanded that appointments of the of the candidates should be based on the merit list published on NTS website. The vacant posts earlier 2014 should be filled by appointing UC based toppers or they should be placed in newly established or schools. The decisions made by DRC or CRC should be called null and wide. The UC based toppers should be appointed if the new vacancies are announced.

There is great pearl of increased desperateness among educated youth in Balochistan if they are not provided their due rights and jobs. The seven recognized universities in Balochistan graduate more than 29,000 students annually, where nearly 10000 of them are female, however, less than 2000 of them can get jobs but the others remain jobless. This keeps the amount of jobless youth increasing.

It was a ray of hope for jobless people in Balochistan when in the last government in December 2016, the Balochistan’s chief secretary Saifullah Chattha directed the authorities concerned to take measures for filling 35,000 vacant posts in government departments. Though a policy was also framed for the recruitment tests for posts of grade 11 to 15 through National Testing Service (N.T.S) and for

Grade 16 and above through Balochistan Public Service Commission (B.P.S.C) but time proved that no serious measures were taken and impossibility spread among youth and graduates.

Currently there are more than dozens of associations of graduates who have been struggling for jobs in different departments in Balochistan.

He added: “The ultimate result of non-seriousness and ignorance persisted because the graduates are wandering here and there in search of any operational and applicable field & travelling in search of employments.

Arif Mengal told that They were not being utilized in the any of relevant fields in this duration of 10 years although the critical issue of water crises was prevailing in Balochistan. “LUAWM is one of institute which can provide potential graduates to the following departments of Irrigation, Agriculture, Public Health Engineering, WASA, Environmental protection agency.” Arif Mengal added. 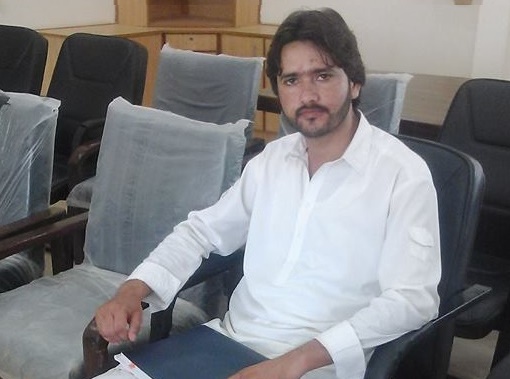 Such as Chief Minister of Balochistan Jam Kama has said that for Balochistan youth, 9,000 to 10,000 vacancies would be announced in the February. The government has been working on different sectors to provide jobs to the youth of Balochistan”.

It should be noted that in a recent meeting with the prime minister, CM Kamal raised the job quota issue which currently stands at six per cent approx. 18,000 jobs in federal services.

Similarly, Balochistan Minister for Science and Information Technology, Population Welfare Sardar Abdul Rehman Khetran shared in a press conference that recruitment process for more than 20,000 vacant positions would be completed by June2019 to reduce unemployment from the province. This should be noted that President All Balochistan NTS Action Committee Saiful Rehman, General Secretary Khadim Hussain, Tanveer Baloch, Muhammad Anwar Khan Khilji were also present on the occasion. The minister expressed thanks to the NTS Action Committee for ending their 10 months long protest on his request.

Giving hopes to youths in Balochistan continued last month. Federal Minister for Defence Production Zubaida Jalal shared a news that plans were being finalized under the public-private partnership to eradicate unemployment in Balochistan. She said that 20000 thousand new jobs would be awarded in the coming months.

A source on condition of anonymity told that bureaucracy is huge obstacle in announcement and filling of the vacant posts in Balochistan. Because all the last chief ministers Dr Malik Baloch, Sardar Sanullah Zehri, Abdul Qudoos Bizenjo tried their level best but could not get success to get announced and fill the posts. 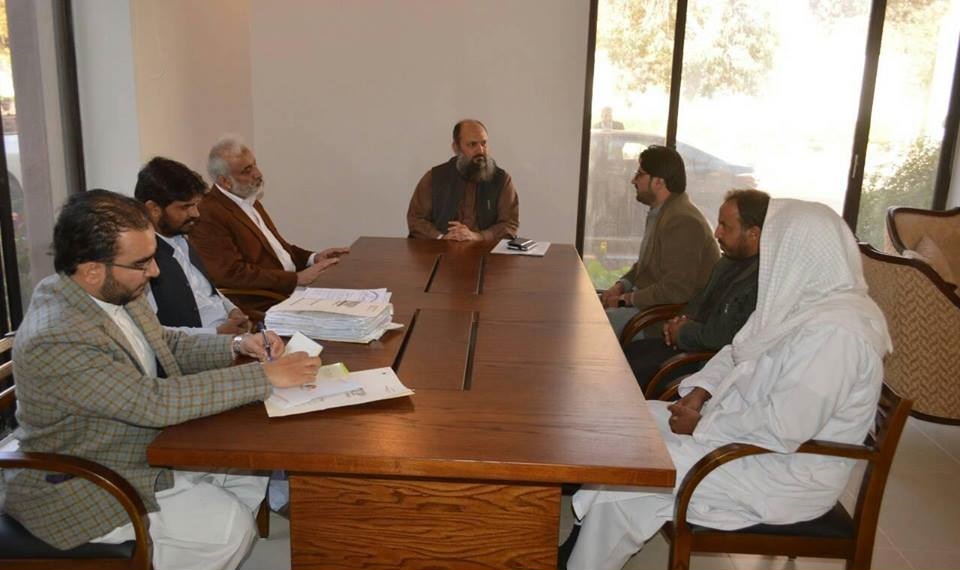 “Currently there are thousands of vacant positions in education, health, Livestock, Revenue, home, agriculture and some other departments but it seems impossible until there is willingness of administration,” he added.

Though the scribe continuously tried to know provincial governments stance on the issue and future plans of the current government, but Bushra Rindh, the spokes persons of Balochistan Government did not response on the issue. However, Member of the ruling party and Balochistan Home minister Mir Ziaullah Langove expressed current efforts of government of Balochistan.

“Government of Balochistan, Services and General Administration Department issued a Notification in December 2018 in connection with Restoration of Recruitment Process-Communication of Details of Vacant Posts BPS-01 to BPS-15,” Mir Ziaullah langove added.

This piece was originally Published in Balochi Zindh.