Dr   Shah Mohammad Marri is a professor at theBolan Medical College (B.M.C.), Quetta, and a renowned Baloch historian and intellectual. He is the editor of the progressive monthly magazine,Sangat [friend[ and the author of several books. The Baloch Hal spoke to him exclusively about the state the Hindu religious minorities in Balochistan, their origin and contemporary challenges.

Who are the Hindus living in Balochistan?

Hindus are Balochs as like the rest of the Baloch people living in Balochistan. They are the ancient people of this land and belong to this place. And I do not agree with the theory of migration of the Hindus, Balochs, Zikris, and other tribes or religious sects of Balochistan. All of them are indigenous to this land.  They have been living here before the advent of the Maher-Gar civilization which is 11,000 years old. Maher-Gar civilization neither destroyed nor burnt. It migrated, for example, to Peerak, Mohenjodaro and Harappa. We can excavate more areas along with the Bolan-River and so on. In a nutshell, for the last 11,000 years, people have been going, coming and getting merged over here.s

Balochistan has also been home to other religions such as Buddhism and Zoroastrians in various time periods, some vanished and some exist.

In ancient times, how did Hindus settle in Balochistan?

Before answering that question, we should know when the Balochs began to settle in Balochistan? Some say that the Hindus have been living here even before the Balochs. It is not true. We all are migratory populations. I do not know exactly what the religion at the time of the Maher-Gar civilization was. Religion and caste system came very late. Different religions emerged during the long history of Baloch. There was trade. Goods were brought over here from Africa and Central Asia. It is difficult to say whether the Hindus or the other castes settled over here before the others.

The people settled in Balochistan due to agriculture and domestication of animals. After that, slowly and gradually, in thousands of years, people today are only partly, not entirely, settled. That is why it is difficult to assert that how and when originally a particular tribe or religion, i.e., Hindus and others settled in the area today known as Balochistan.

Moreover, Balochistan has been urbanized. There were cities. It is the land of different tribes, castes and traders. Nobody can say with certainty as to who settled here first.

How do you see the relations of the Balochs with the Hindus?

Balochistan has a caste system. The Hindus are viewed as low castes. They are not considered as equals.  For instance, they are not given equal shares in land distribution nor can they marry the people from the majority religion the upper caste. Besides the religious minority Hindus, even this caste system exists within the majority Balochs among whom the lower castes are known as the Sarmasthani and the Loris.

In eastern Balochistan, there are people known as the jath (camel men). They are also not given equal shares in land. Same is the case with the Hindus and the women in the Baloch society. We do not give equal rights to our women. So, it is purely because of the caste system that exists in our society..We treat someone as superior and the other as inferior. If someone from the superior caste is killed people take revenge but nothing happens if someone from a lower caste is killed. Similarly, as far as honor killing is concerned, there is mostly practiced the tribal people, i.e., first grade citizens.

Unfortunately, the Hindus are treated as unequal. They are second grade citizens. They are traders but they entirely depend on us for their security.

In return of the protection offered to them by the local tribal chiefs, the Hindus have to give goods, clothing, and valuable gifts to the concerned chiefs.

In Balochistan, Hindus are not given share in tribal lands. They do not possess livestock. They only own shops and do trade.

While they land on the same land, the Hindus barely have any relations with the majority population except inferiors and superiors.

Then how have the Balochs and the Hindus been living together for so long? 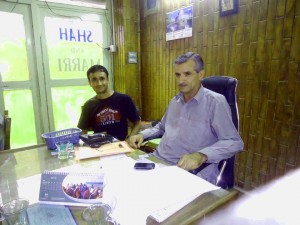 Despite being treated as second grade citizens, the Hindus have been allowed to practice their religion. They are allowed to go to their temples. In other words, they are simply allowed to live.

They do not have a say in tribal affairs.

The Hindus have lived in Balochistan due to the trading opportunities in urban and semi urban areas of the Balochistan.

How have the Baloch elders been treating Hindus in Balochistan?

The Baloch elders have been safeguarding their honor, lives and property.

Does that mean that they are granted full rights to the Hindus? The state here is feudal and capitalistic. It is not entirely replaced by tribalism. Tribalism has broken down and does not exist in its traditional form, which means presently there is no government, Sardar, or tribal traditions. This breakdown of the tribal society has further contributed to the people’s miseries.

Because of the breakdown of the tribal structure, there is a power vacuum which has further left the religious minorities vulnerable to all forms of assaults and discrimination.

What have been Hindus’ contributions for Balochistan?

They have made positive contributions. For example, when the British intruded in Balochistan, the Hindus fought along with the rest of Balochs against the British.

What are the Balochistan based Hindus’ challenges?

The big challenge the Hindus in Balochistan face is that of equal rights. The class system has not been abolished yet. We should get rid of it.. It is the responsibility of the state and the government to treat all citizens equally irrespective of their religion, caste and ethnicity.

In Baloch society, there are exemplary punishments for the killing, robbing and humiliating the minorities.

Do you agree that Balochs and Hindus presently do not have amicable relations?

Presently, nobody has amicable relations with the other.  People are generally against each other. We live in such times that even a brother is against the other brother.I blame capitalism and materialism for such changes in people’s behaviors. If the rest of Balochs and Hindus don’t have amicable relations, then it is because of the same capitalistic system. Everything is under the control of market. It is also the market that monitors, maintains and controls you in today’s time. Market is a cut throat competition.

Why are Hindus migrating?

Again, everyone, not only the Hindus, is migrating from Balochistan.. Take the example of the Marri tribe. They are also migrating due to the law and order situation. This land has been burning for the last thirty years. It has become an inferno for all the castes. Same is the case with the Hindus, the Christians, the Hazaras, the tribal Balochs, the settled Balochs and the Pashtuns. All of them are migrating from pillar to post to find a safe place.

If the Balochs sardars and landowners are migrating from here because they feel unsafe then what should one expect for the “second grade citizens”? Where are the Marri, Zehri and Mengal Sardars? All of them are sitting in Karachi or overseas because they do not feel sufficiently safe in Balochistan because of the bad law and order situation. . They even cannot visit their own native villages.

Moreover, our region is the epicenter for the interests of all international powers.

If you go to the Marri and Bugti areas, you will hardly find those native people in their own tribal areas. A majority of them has been compelled to migrate to Sindh where now you encounter a Marri or a Bugti in almost every district. People are also migrating due to the hunger and inadequate trade and business opportunities.

So, it is not only the Hindus who are migrating but everyone else is running for a safer place to hide and make a living.

Why are the Hindus so susceptible despite living in Balochneighborhood?

It is due to the law and order situation. On the other hand, the state has also targeted them. For instance, in 2005, thirty-five Hindus were killed in Dera Bugti by bombing the city. After that, in great number Hindus migrated from there,

otherwise no one wants to leave his motherland. The Hindu community has intimate relations with other communities. They are leaving Balochistan because they want to survive.

What should be done for the protection of the Hindus?

Well, what do you think should be done for my security? What should be done to ensure your security? Hindus, you and I all face the same problem: security. There must be an elected and accountable government to address everybody’s concerns. The state is solely responsible for the security of life, property and honor of its citizens. Email address: akbarnotezai@yahoo.com