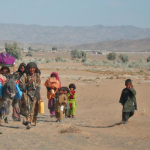 drinking water.  The women and children fetch water from dirty pools of rain water from distance of about 10-15Km on the back of animals.  No attention of previous governments, elected Member of National Assemably (M.N.A) and Member of Provincial Assembly (M.P.A)  for the provision of such a basic need of life has caused great threats of diseases in the deprived areas.

The deprived inhabitants of villages have appealed the higher authorities to install tube wells and start drinking water schemes on operational basis.

Published in The Balochistan Point on June 28, 2013

2013-06-28
admin
Previous: Man killed in landmine blast
Next: Enforced disappearances must come to an end