The tents of fishermen in the heart of the nearby hill, the noise of seabirds, torrents of breeze from the sea and the incessant music of waves are the scenes that enchant visitors at first sight. Boatmakers could be seen busy in refurbishing and repairing the boast at the beach.

If you travel from Pasni to Ormara, Kalatu Bandar beach lies 8 km to the south of Makran Coastal Highway near Tak Village in Ormara tehsil. It’s around 38 km from Ormara and 142 km from Pasni.Tak is a small village in the bosom of a hill and is itself a marvel of beauty.

However, the real beauty treasure lies three km to the south of the village. Kalatu Bandar is a natural harbour as its jetty extends quite a considerable distance into the sea and is pretty wide. The jetty is surrounded by water on three sides. For ages, local fishermen have used it as a harbour for their boats.

As the jetty is surrounded by water on three sides, it has a lot of space for parking boats overnight. The fishermen rest overnight in their tents nearby and return back to the sea early in the morning for fishing. 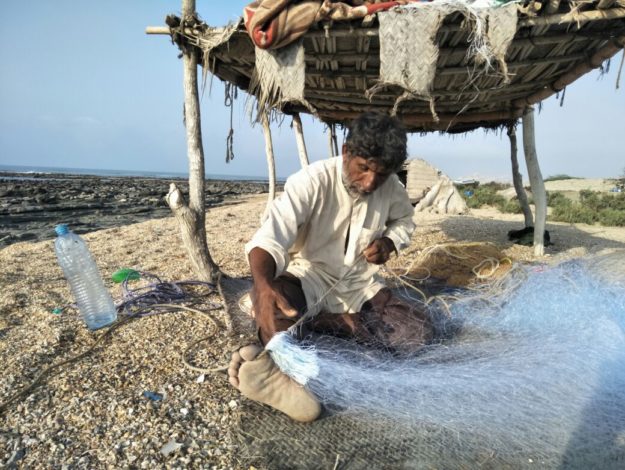 A man is making a fishing net.

There is a huge variety of sea life in the area around the beach. The season of fishing starts in mid-August and extends until the end of May. The geographical shape of the bay keeps it safe from bigger waves and sea storms making it a heaven for the fishing community.

Shafee Ahmed a fishing boat captain talked to Pak Voices, saying, “Normally, the area is populated with small fishing boats from Ormara. But in case of rain or a storm, even the bigger sized fishing boats and ships seek refuge from the wrath of the sea.”

There is also a yard for fixing damaged boats and manufacturing new boats. The boat mechanics are masters of their trade and work with dedication as a majority of locals’ livelihood is associated with the sea one way or the other.

Sajid Baloch, a boat fixer told Pak Voices, “If the fishing boats get a lot of business at sea, we get a lot of repair work. In case of little or no business, the boats need no repairs and we have nothing to do.”

Sakim Baloch, a boat captain, while telling Pak Voices about the fascination of Kalatu Bandar, Said, “This is a beautiful picnic spot. People come here from far off places to relax and enjoy picnic parties. There is not a single day when there are no tourists here.

“A lot of people spend a night here to view the breathtaking morning sight. At times, musical concerts are also held here.”

Gulab Baloch, a tourist at the beach spoke to Pak Voices, saying, “A view of docked boats between Kalatu Bandar and Tak village is wonderful. But the most enchanting sight is the sunrise here. It is simply mesmerizing and worth witnessing.”

He wanted people to know about the splendour of Kalatu Bandar, adding, “If one is fond of natural beauty, one should visit this place at least once in life. It’s a place with unmatched natural beauty.”

Hani Ramzan is working with Pak Voices as a citizen journalist from Pasni, Gwadar.

Published in The Balochistan Point on November 17, 2017

2017-11-17
admin
Previous: Kalat: Govt Girls Middle School Iskalkoo lacks Basic Amenities and Its Own Infrastructure
Next: People with disabilities protest against violation of their job quota in Balochistan