Quetta – International literacy day seminar stressed on the need of promoting mother tongues as a medium of instruction to improve literacy in Balochistan, on Thursday.

A seminar titled “Role of Literacy in Sustainable development: In Balochsitan’s perspective” was held in Balochi Academy to belatedly observe international literacy day which is observed on 8th September.

Seminar was organized by Balochi Academy in collaboration with Civil Society Balochistan while Balochistan Point was the Media partner of the Seminar.

Our education system is only producing literate not educated people – Asfandyar Kakar.

Addressing the Seminar, Asfandyar Kakar, Additional Secretary education department, said that there is a stark difference between a literate and educated person. He lamented that our education system is only producing literate not educated people.

“Board exams for 8th class, that remained suspended for over a decade, would be resumed from this year,” revealed Mr. Kakar. He further added, “From now on promotion of District Education Officers (DEOs) would be made on performance assessment rather than seniority or political backing.” 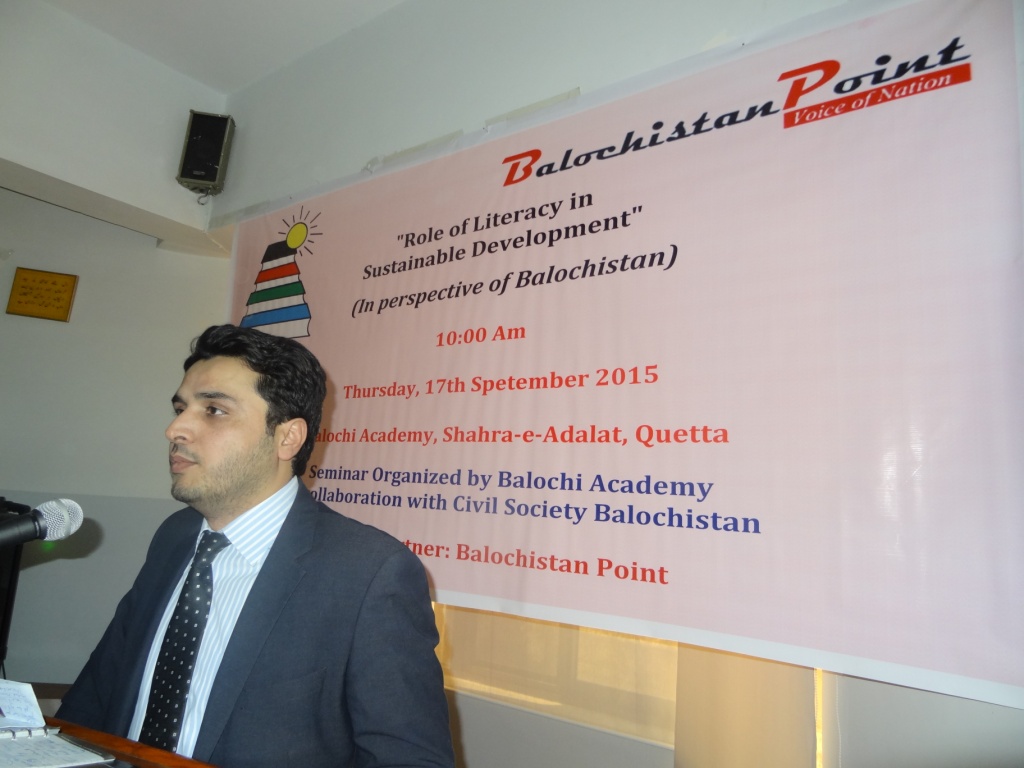 Qiaser Jamali of UNESCO delivered a detailed presentation on status of literacy in Balochistan. “Low population density and lack of continuation of government policies are the two main reasons for failure of literacy promoting campaigns,” claimed Mr. Jamali.

Lack of continuation of government policies is a stumbling block for Literacy promotion campaigns – Qaiser Jamali. 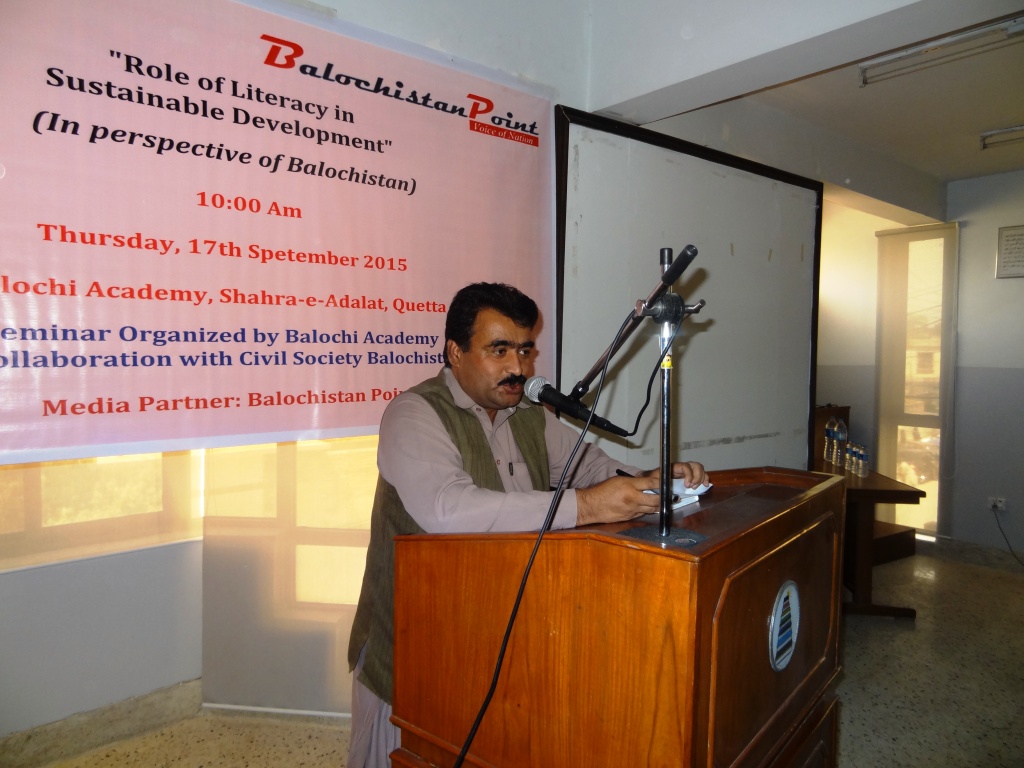 Panah Baloch, general Secretary of Balochi Academy, emphasized on the need of using Mother Tongues as a medium of instruction for students in Balochistan. He further added, “Government must revise the existing syllabus in order to improve quality of education.”

Other speakers who spoke at the occasion include Munir Nodazai from Education department, Rashid Mirwani and Sarfraz Ali from Directorate of Basic education, Khalil-ur-Rehman from National commission of Human Development (NCHD), Nadia Ali of education department of University of Balochistan and Mir Haroon Raisani a social activist.

Ameer Baksh Baloch, Youth development Officer in CYAAD appreciated the seminar. “Seminars on education should target those who are unaware of the issues being discussed.” Mr. Mengal told Balochistan Point during Seminar. 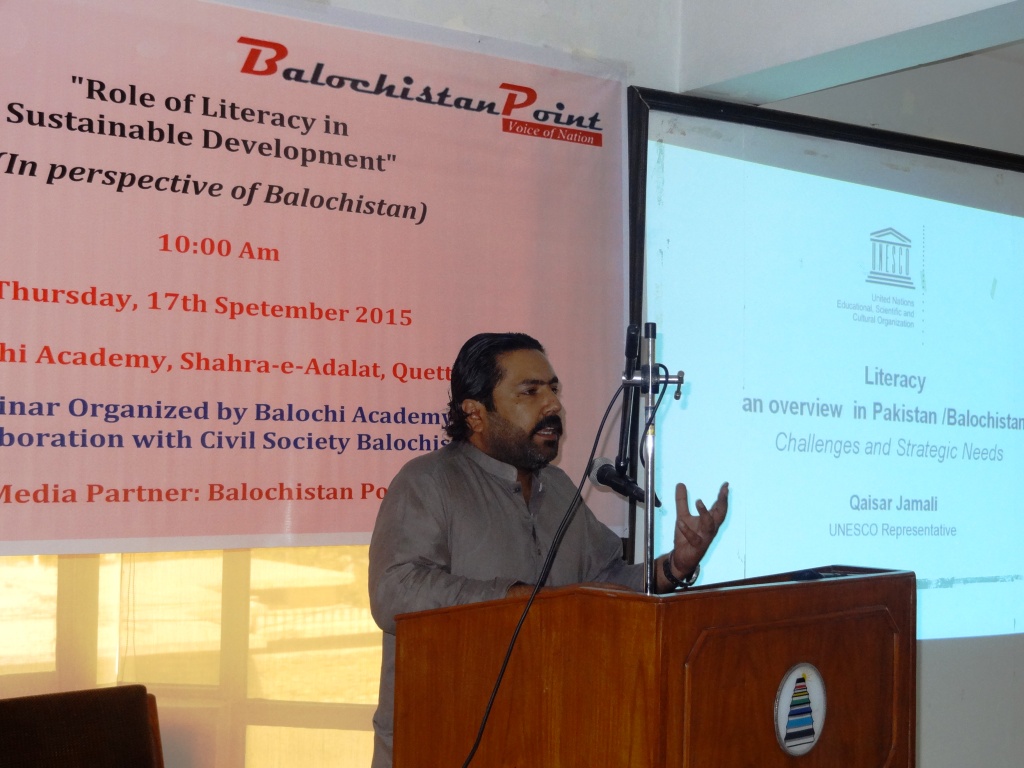 “No campaign or effort to promote literacy can be successful if women are not specifically focused in it,” Shabbir Rakhshani, a journalist and social activist, told Balochistan Point.

No campaign to promote literacy can be successful if women are not specifically focused – Social activist.

Wadood Jamal, a social development practitioner told Balochistan Point that focus on adult literacy is as important as focus on literacy of youth. 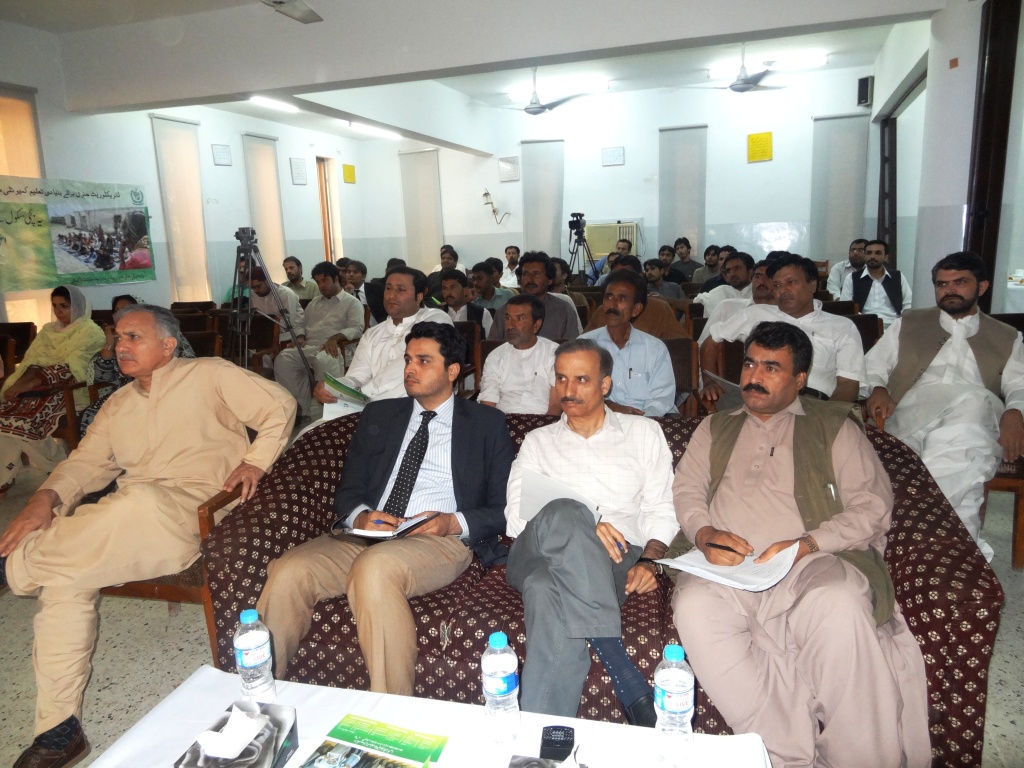 Participants of the seminar

At the end of the seminar a set of recommendations were drafted that would be send to government departments and social organizations working on education, as a policy guidelines on how to improve literacy rate.

Education Seminar 2015-09-17
Editor
Previous: Parliamentarians and Civil Society to Strengthen Rights of Women, Minority and Youth
Next: GDA School Crisis: Who is at Fault?