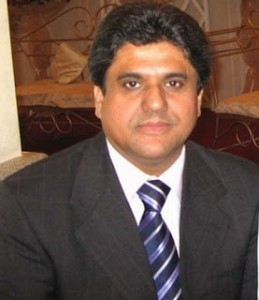 “It’s better to die with your spurs on, Instead of a slow death in bed, I’d rather death come to me while I’m fighting for a purpose.”

During his last days in the mountains of Barkhan (whom the great Balouchi national poet Mir Gul Nasir Khan has said, “glory of Balouch ego”) Rock was the favorite pillow and the commitment with the nation was has eternal weapon of Nawab Bugti. He died a soldier death.

Mourning is a little word; grief is a minor sound, weeping is a tiny expression and   the only way left to pay tribute to Bugti Saheb is to unite against the dictatorship and autocratic military establishment in Pakistan. Pakistan is an exceptional state where state does not have a military but military has a state to rule, plunder and Lott.

We have no words to pay tribute to the great soldier of Pakistan movement, the true patriot and nationalist, Nawab Akbar Shahbaz Khan Bugti II(1927-2006). What my great Sindhi, Balouchi, Siraiki, Punjabi and Pakhtoon friends write, in the honour of Bugti, is the true sentiment of the patriot people of this land.

He is the victim of military fascism in Pakistan, who was taken away from us, democracy, tolerance, institutions, self-respect of a nation, sovereignty of the people, values and land like Bengal and leaders like Zulfiqar Ali Bhutto.

I still regret to refuse by lovely friend Javed Kazi’s offer to go to Dera Bugti, where Javed was supposed to have Bugti’s interview for Sindh TV. One of our common “still missing” friends Raof Sasoli (may GOD bless him) arranged the interview.

I was so glad to hear from Bugti that he was taught by great scholar Allama I I Kazi, a man of great farsightedness and vision. He must have taught Bugti the grace of life and death, and the death he had chosen for himself was a death of great worrier.

The entire team of Sindh Democratic Forum (SDF) is grieved and condemns the Target Killing of Bugti and appeal to the nation to lodge an FIR against a usurper General Musharraf.

Republished in The Balochistan Point on August 25, 2013

Note: This piece is republished today on the occasion of Nawab Akbar Bugti’s seventh death anniversary because of its relevance.