QUETTA: A number People with Disabilities have arranged a protest camp in Quetta against violation of their job quota in Balochistan. They have been protesting for more than a week.

Balochistan’s government has allocated five percent share for People with Disabilities; however, the special persons allege that it is not being implemented.

This protest has been organized by Anjuman Mazoraan, organization working for welfare of People with Disabilities. The members of this organization claim that healthy people are being appointed on their job quota, which is exploiting the right of special persons. 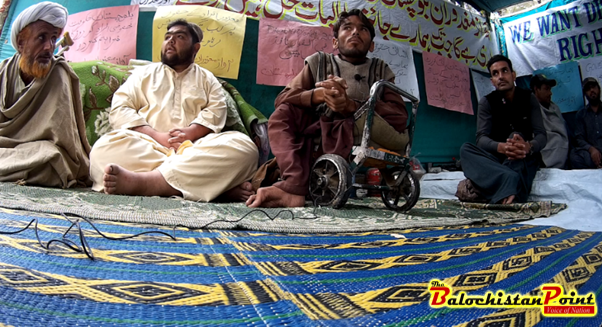 People with Disabilities in protest camp for their rights.

Saeedullah, a young man in the camp told that he was unable to get admitted to the village school in childhood and his disability was also an obstacle in the way of employment. “So far I have applied for employment in 17 government departments but I have not been appointed in any of them.” he added.

According to these protesters, the number of people with disabilities in Balochistan is in thousands, but the social welfare department has no authentic figures regarding their numbers.

Izatullah, President Anjuman Mazoran Balochistan said that nothing was going to be done for our welfare. “We have been protesting for our job rights but rather than providing us jobs we are being deprived,” he added.

Mohammad Asghar Ahfarwal Secretary Social Welfare said: “This is the responsibility of Social Welfare Department to assist disadvantaged persons and their organization. If their demands are conveyed to us so they can reach their respective authorities.”

Published in The Balochistan Point on November 19, 2017

2017-11-20
admin
Previous: Kalatu Bandar: An inviting beach in Ormara
Next: Universal Children’s Day and violence against children in Pakistan