KHUZDAR:  There are 33% of seats are reserved in local government and 17% in provincial assemblies and national assemblies which are significant legislation has been passed in Pakistan that gave the legal rights to women to participate in political and electoral processes. Instead of this tremendous progress, there are still 11.7 million more men on the electoral role than women. In 2017, the federal cabinet reformed electoral laws making it mandatory for political parties to allot five percent of their tickets to women candidates to boost women’s representation in political decision-making and law-making, Adv Rasheed Ahmed, (Head of Programs HARD Balochistan) said on Tuesday.

He was speaking at the launching ceremony of the project “Strengthening Women’s Participation in Democratic Governance in Pakistan” of Health And Rural Development (HARD) Balochistan funded by Commonwealth Foundation. He shared, under this project they will give different platforms to young women to build their capacity on leadership, democracy, good governance and governance system at District or local level in district Khuzdar and Mastung. These young women will also be engaged at different level for generating awareness among women about importance and process of CNICs and voting registration, voting education and their civic and political rights and besides, the women will also be guided and facilitated in registering their CNICs, votes and contesting elections. He further shared, the local CSOs, CBOs, Political parties, government departments and Women Volunteers of the project will be brought at one page to discuss tasks and challenges and work together toward achieving the project results smoothly.

Mr Aurangzaib Badini (Additional Deputy Commissioner Kalat Devision) was the chief guest of the event where he appreciated HARD, “Women leadership capacity and voting turnout is extremely low, It is a wonderful initiative and an innovative project which will help young women to understand the local governance system at the platforms of Informal District Assemblies and improve their leadership skills as well as it will also reduce the gender inequality and improve their participation in democratic and electoral process and advance the women rights in the areas”.

Further he added, “Islam gave all her rights to women and same the constitution of Pakistan has given equal rights to the women and this time we understand and make efforts collectively advancing women rights in the society, the government departments will ensure the cooperative support to HARD and the CSOs to strengthen women’s participation in electoral processes”. 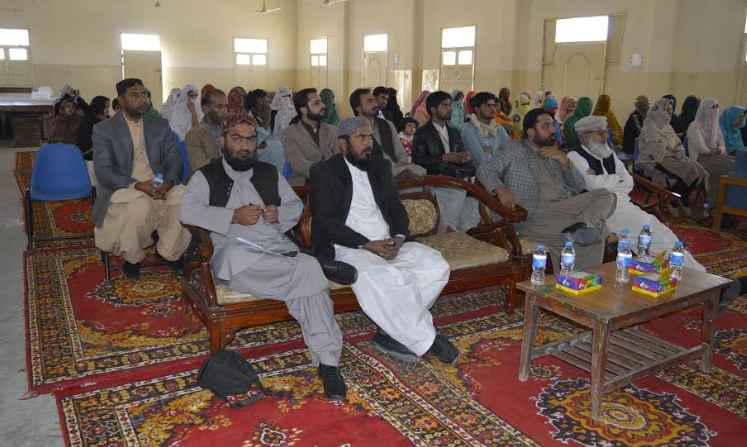 In the event, different stakeholders addressed from the event and raised different issues in the event which hampering women’s participation in democratic and electoral process including slow process of CNICs and voting registration by NADRA and ECP, lack of registration centres, lack of the capacity of women, lack of awareness of citizen about the voting education and their civic rights and different tribal, religious and cultural customs and restrictions. They also admired the efforts of HARD and showed their willingness for support where required and also were expecting long lasting change from the project.

The project launching ceremony was held in the hall of Divisional Public College district Khuzdar where People from different walk of life including government departments, District Assembly members of local government, local CSOs, women, political parties, social activists, media persons from print and electronic media, religious, tribal and other notables and influential participated in the event.

Published in The Balochistan Point on January 2, 2018