Quetta – Civil Society Balochistan demanded the safe and quick recovery of three girls, abducted from Karachi, during a protest held outside Quetta Press Club on Saturday.

A protest demonstration was held to protest the forced abduction of three girls from Karachi who originally belong from Awaran district of Balochistan.

Three girls named Surat, Sabina and Nageena were kidnapped from outside their home in Bhangoria Goth locality of Azizabad Karachi. Three abducted girls allegedly are under the custody of an influential landlord in Shikarpur district of Sindh. 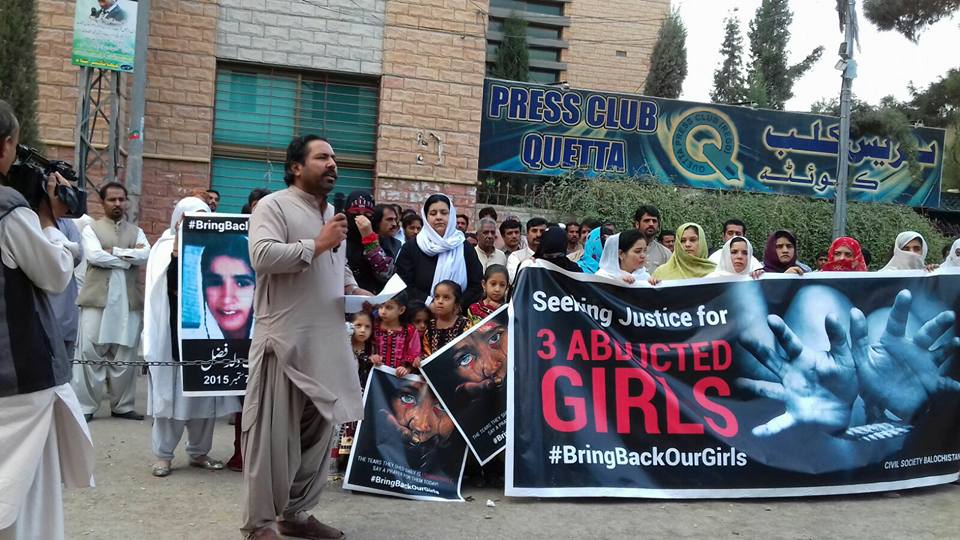 A scene of the protest

Addressing the protest demonstration, Jameela Baloch of Balochistan National Party (BNP) said that “Its first time in history that females of Balochistan have been kidnapped from Karachi.” She urged people of Balochistan to stand with the family of the abducted girls at the time of need.

Its first time in history that females of Balochistan have been kidnapped from Karachi – Jameela Baloch.

Javed Baloch, a student leader termed the abduction of three girls a pure humanitarian issue and lamented the apathy of Sindh government in taking interest in the issue.

“Abduction of three girls, who belong to a poor family of Balochistan, is continuation of unjust treatment meted out to people of Balochistan,” said Sabira Islam advocate of National Party while addressing the protest demonstration.

Protestors urged Chief Justice Supreme Court of Pakistan to take Sou-Moto notice of this issue and take practical steps for the recovery of the three abducted girls.

Organizers of Civil Society Balochistan thanked all the participants of the protest demonstration and vowed that more protests will be carried out in near future if no action is taken on this issue.

Abduction of three girls is continuation of unjust treatment meted out to people of Balochistan – Sabira Islam advocate.

Meanwhile, a police team that travelled to Shikarpur form Karachi to recover the abducted girls was fired upon by the miscreants.

Allegedly, miscreants fired on the instructions of the powerful landlord who is holding three girls as captives.

Sources close to the family of abducted girls told Balochistan Point that Sindh Police has ended its efforts to recover the abducted girls after facing pressure from the influential landlord of Shikarpur.

Published in The Balochistan Point on October 17, 2015