Quetta: Claims Of Good Governance Swept Away By Rainfall

Quetta – Non-stop rainfall on Saturday swept away the claims of Balochistan government to transform Quetta into little Paris.

Rainfall started on midnight of Saturday and continued for 20 hours without any break. In aftermath of the rainfall, roads of Quetta presented the picture of foul smelling drains. 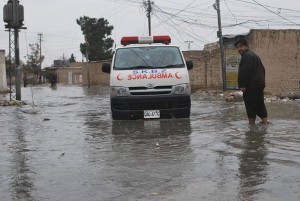 Jinnah Road, center of Quetta city was completely taken over by the rainfall water. Residents of the outskirts of the Quetta faced the inconvenience of drainage water entering their homes.

Staff of Quetta Metropolitan Corporation and Water and Sanitation Authority were absent from the scene and didn’t make any effort to clear the water from roads of the city. 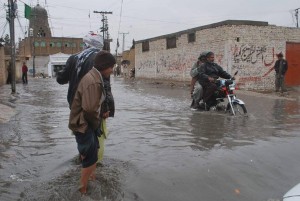 Drainage system in entire Quetta city has been rendered obsolete due to the lack of maintenance by government.

Last year, provincial government spent Rs. 1.77 billion on reconstruction of drains in Quetta city and the failed outcome was witnessed by people of Quetta city. 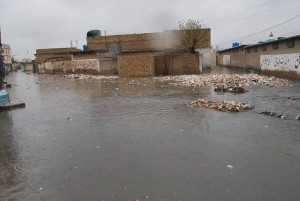 “Funds spent on reconstruction of drains went into the pockets of concerned officials and only a meager amount was actually spent on the drains,” a disgruntled citizen alleged while talking to The Balochistan Point.

Another citizen said, “If Balochistan government had not delayed local body polls for over a year maybe there had been some improvement in sanitation system.”

Corruption Rainfall 2015-03-15
Editor
Previous: Balochistan Ignored For Post Of Chairman Senate
Next: Inaction Of Government Will Maximize The Impact Of Drought In Balochistan: Azat Foundation