Quetta Press club closed to mourn the killing of journalists

Quetta: Journalist community in Quetta has decided to close Quetta Press Club on Monday to mourn the killing of journalists in Quetta.

Three journalists were killed in center of Quetta city by unknown assailants on 28th August. On Sunday, the protest by journalists against killing of their three colleagues, entered 10th day.

In order to protest the killing of journalists, members of Quetta Press Club (QPC) and Balochistan Union of Journalists (BUJ) marched on Qandahari Bazar and Jinnah road, in Quetta. The marchers chanted slogans against the failure of government to provide security to journalists in Quetta and other parts of Balochistan.

The protestors were carrying placards which carried the slogans of “Stop killing journalists” and “Long live freedom of expression.” 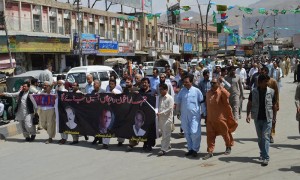 The decision to close the Quetta press club was announced by Irfan Saeed, President of BUJ while addressing the protest rally. “He said that “we will close QPC from 9 am to 6 pm as sign of protest.”

Dawn has quoted Irafn Saeed to state that Pakistan Federal Union of Journalists (PFUJ) has also decided to close Press Clubs all over Pakistan in order to express solidarity with journalists of Balochistan.

Journalists expressed their frustration at the inability of government to apprehend the killing of journalists in Balochistan. According to Shehzada Zulfiqar, a senior journalist, “Protests will continue until killers are arrested and a judicial commission probing the journalist’s murder is formed.” 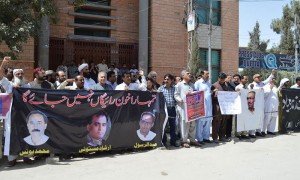 It must be noted that around 40 journalists have been killed in Balochistan in last 4 years. Government has failed to arrest killers of even one journalist.

2014-09-07
Editor
Previous: Balochistan: a land divided
Next: Local bodies councilors threaten to resign if power not transferred to local bodies