Quetta – An mysterious group calling itself ‘Shura-e-Fidayaan Islam has threatened to attack Quetta Press Club (QPC) if Christian members of the club are not expelled.

A threatening letter was received by QPC on Saturday by a group called ‘Shura-e-Fidayaan Islam. The Letter alleged that four Christian members of QPC are involved in propagation of Christianity.

Letter warned the QPC officials to either expel the four Christian members from the club or be prepared to face the consequences in the form of a deadly strike. 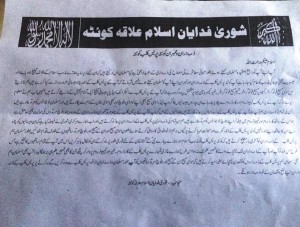 Raza-ur-Rehman, President of QPC denied the allegation leveled against four Christian members of the QPC while talking to Media Watchdog, Freedom Network.  “I have asked government to beef up the security of QPC to prevent any terrorist attack,” added Mr. Rehman.

Balochistan has been a hell for working journalists for the last 5 years. Over 40 journalists have been killed in the province and perpetrators of not a single one of them had been apprehended.

Journalistic community of Balochistan urges government to track down the people who have sent the threatening letter and ensure security of QPC and all journalists of the province.