QUETTA: Speakers paid rich tributes to Syed Zahoor Shah Hashumi and Jabbar Yar, at Brahui Department in a reference in their memory organized by Baloch Student Action Committee and Brahui Department of the University of Balochistan.

The reference seminar was held on the birth and death anniversary of Syed Zahoor Shah Hashumi and Jabbar Yar, the two committed literary persons who served their times for improvement of the Balochi and Brahui languages respectively. 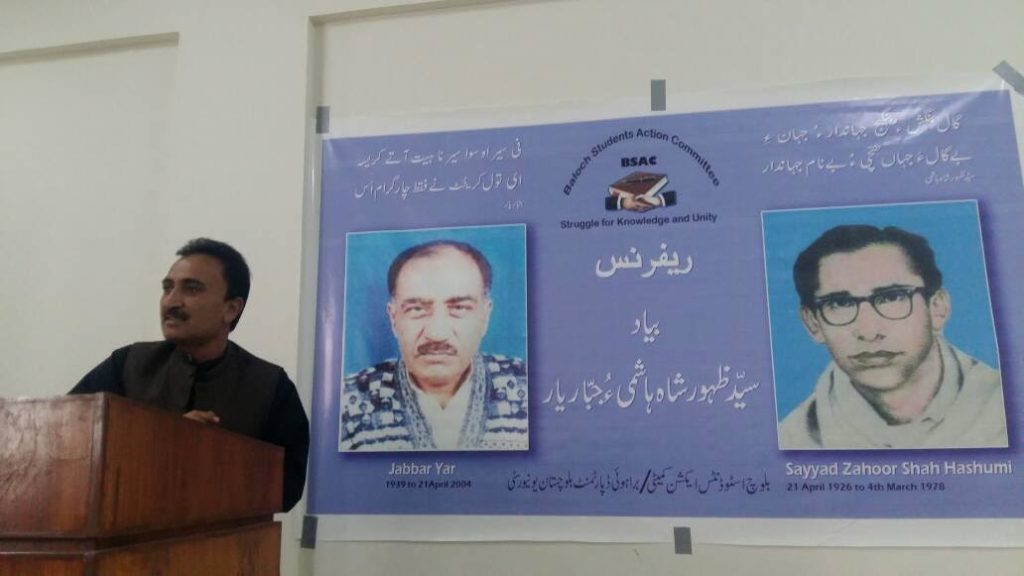 Both the literary icons were paid reverence and awarded with everlasting remembrance. An enormous number of the students attended the program.

Mujahid Baloch while delivering his lecture stated: “it is a big achievement that two personality’s anniversaries of the Balochi and Brahui are being commemorated jointly which declares how successfully we have abrogated the gapes among us.” 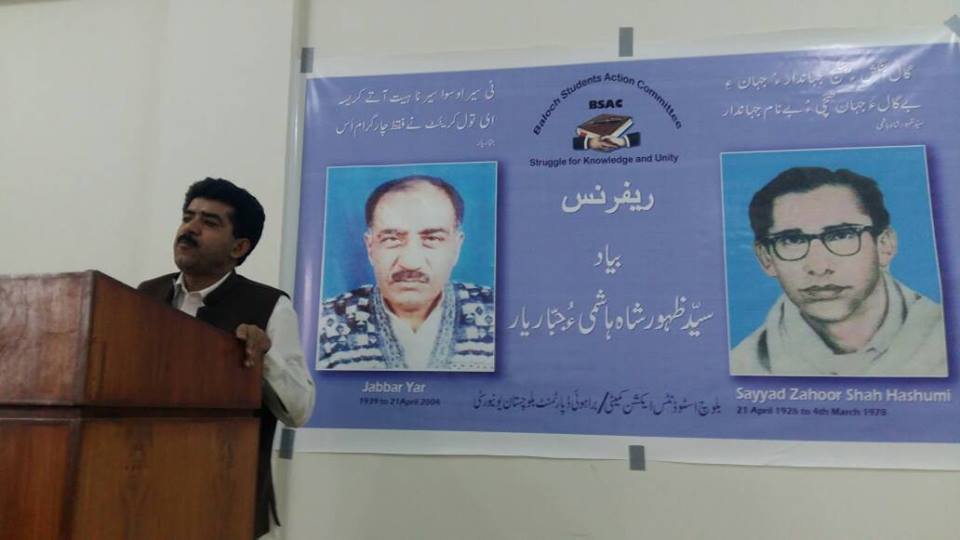 Sangat Rafik Baloch, a professor of Balochi department briefly delivered a lecture over Syed Zahoor Shah Hashmi’s contributions for the Balochi Literature. He said Syed was not only a Poet but also a linguistic, Novel writer, short story writer and a compiler.

He said Syed was entirely a literary person who did a gigantic job by compiling a Balochi lexicon “Syed Ganj” and wrote the first ever Balochi Novel “Nazzok” which determined a life of coastal area.

Dr.Liaqat Sani, a professor of Brahui department made a detailed speech over Jabbar Yar’s contributions for the Brahui literature. He said:  “Jabbar Yar is among the pioneer poets who practiced from the first time the cynicism lyric and earned a great name in the history of Brahui poetry.” 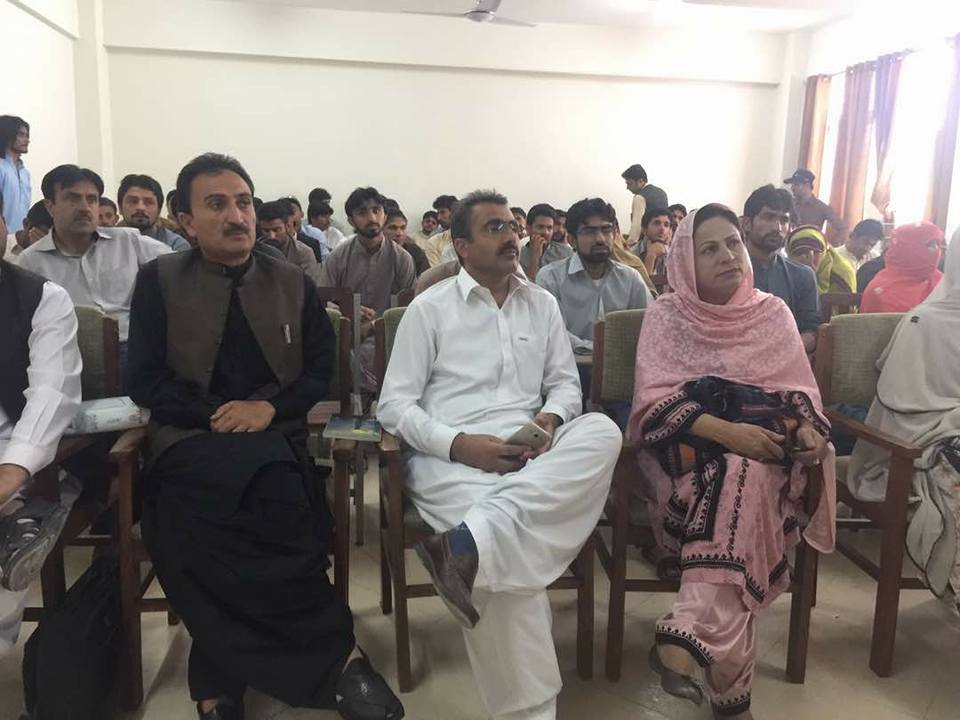 Dr.Manzoor Baloch, a professor at Brahui department and a renowned writer delivered a very brief speech over Syed Zahoor Shah Hashmi and Jabbar Yar’s contributions for the Balochi and Bravi literature respectively. He said that both the personalities had written very effective chapters which need to be given keen considerations. 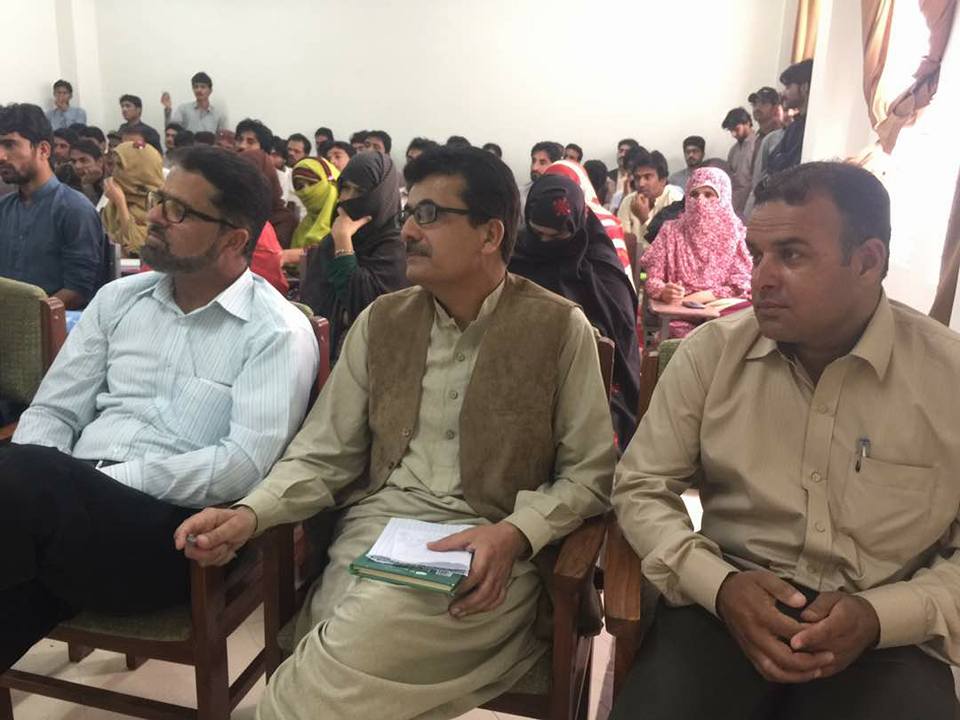 In conclusion, the departmental chairman Shabir Shawani thanked the guests and the speakers for their precious time for such an informative program. He said in future they would  conduct such programs regarding culture, language and literature jointly to highlight the importance of all respectively.

Published in The Balochistan Point on April 24, 2017