Renewing Threats To Education In Makran

Zahid Ali Baloch was an educator and a great educationalist with a projecting vision regarding equal rights of education for both male and female. He was assassinated couple of days ago in the backdrop of the threats that private schools and the owners were facing in Makran repeatedly.

The private schools in Panjgur District were closed for almost three months due to pamphlets which were written by hand with a fabricated slogan of an organization namely ‘’Tanzeem-ul-Islam-ul-Furqan.’’ The practice of this mysterious organization is akin to that of Boko Haram which is an outlawed Islamic militant organization active in Nigeria against westernization and western education. 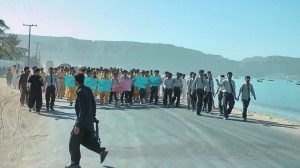 The threats given to private schools in Panjgur were a deplorable turn from such an organization which was unheard of before. This compelled the students of these institutions to conduct a demonstration against this as one of the schools manager’s car was set on fire while he was on his way to his school.  Another school van was also set on fire because of which the parents stopped sending their children to schools.

Condemning these drastic acts, a rally was held with thousands of student participants. They demanded for a peace and threat free educational system in Panjgur and marched till Deputy Commissioner House from a school. Later on, the Chief Minister (CM) Dr. Malik Baloch visited the overwhelmed schools and assured for a full-fledged response accompanying which receiving of threats form ‘’Tanzeem-ul-Islam-ul-Furqan’’ halted and with surety of provision of ample security, the parents were reluctant to send their children to schools lately. Of late, the parents have decided to send their children to schools, and private schools have decided unanimously to continue operating despite threats.

“How this group became calm with just arrival of the CM. Was a secret meeting held with this militant group? If yes then why the truth was kept hidden, lamented a resident.”

Before this, the private schools in Kech and the famous Delta language center were closed down on the allegation that these institutes were providing anti-state literature to students.

BSO-Azad, said in a statement stated that, ‘’this sort of conspiracy to prevent the Baloch Students from gaining education. Religious people are being used and they are doing such a condemnable act of closing down the schools.’’

It seems, seeing a sort of change of tactics, which can be seen in assignation of a great teacher and educator Zahid Ali Baloch. His killing is a massive loss and an enormous threat for all private schools and their heads who were once intimidated to halt educating the girls in Makran.  Zahid Ali Baloch was a seeker of education to Baloch Nation, founder of Oasis School in Gwadar and a man with a positive opinion. Gwadar lost an iron man and a legend whose dreams were to let not any child be out of schools.

This new layer of fear is alarming and this seems a connection with the groups eliciting an environment of terror regarding education. The assassination of a great educator like Mr. Zahid has triggered a new wave of fear among educators and students in Makran. Government administration needs to take steps to apprehend the killers of a person who was serving the humanity.

Author is a M.Phil student in University of Balochistan

2014-12-05
Editor
Previous: NP And PKMAP Abusing Their Powers By Delaying Local Bodies Elections: APDA
Next: A Geo-Political Analysis Of Balochistan