Gwadar: Zahid Askani, founder and principal of Oasis School was target killed by unknown miscreants in Gwadar on Thursday.

According to police sources, Zahid Askani was intercepted by target killers when he was on his way to Oasis School and died on the spot.

As usual, the killers easily managed to flee the crime scene. 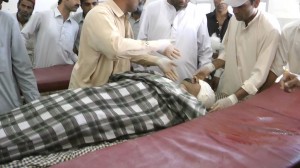 Zahid Askani received his education from abroad and came back to his home region of Makran for promotion of education. He was the founder of Oasis School in Gwadar which was a modern Co-education schooling system.

Education sector in Makran has been the target of many terrorism acts in recent months.

“Assassination of Mr. Askani is yet another attempt to disrupt the education system in Makran region,” said a citizen of Gwadar.

2014-12-04
Editor
Previous: Protest By BNP And BSO: News Channels Shut Down In All Balochistan
Next: NP And PKMAP Abusing Their Powers By Delaying Local Bodies Elections: APDA