Abdul Rahim Zafar was born in Gwadar district. He was the general secretary of Baloch Students Organization (BSO) in 1968 when the first spilt in the organization took place. He has written two books titled “Sang-e-Larzan” and “Azadi ka Safar.” The Balochistan Point conducted a short interview with Abdul Rahim Zafar about the burning issue of China-Pak economic Corridor and controversy surrounding alleged changes in its route. 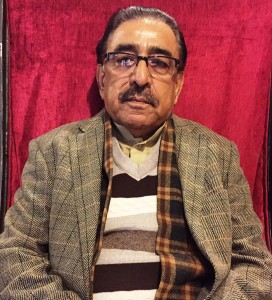 Adnan Aamir: Please tell us briefly about your political career?

Rahim Zafar: After completing my education and quitting BSO, I served in the Prime Minister Office as an Officer on Special Duty, Grade 18, during the premiership of Zulfiqar Ali Bhutto. I unsuccessfully contested on a national assembly seat from platform of Pakistan people’s Party (PPP) in 1988 elections. In 1998, I developed differences with PPP and joined Jamhoori Watan Party (JWP) of Nawab Akbar Bugti. I served as the labor secretary of JWP till the assassination of Nawab Akbar Bugti in 2006. Last year I served as the President of Gwadar Chamber and Commerce and Industries.

What’s your opinion about the current political setup in Quetta? Is it doing any good to Balochistan?

In my opinion the current political setup is a miracle. First time we are having a government in Balochistan that emerged from the grass root level. Common political workers belonging from BSO have come to power this time. People of Balochistan have high expectations from this setup and want it to deliver. They have many well wishers in this connection and I am one of them. It is up to them whether they will disappoint the people or fulfill their expectations.

You belong from Gwadar. Please tell us what’s the status of Gwadar Port? Is it fully operational?

I belong to Gwadar and well aware of the ground realities of Gwadar port because professionally I am connected with Gwadar port as a shipping and clearing agent. Gwadar port status is partially operational. Presently, consignments of Fertilizers are being unloaded and handled at Gwadar port only.

Do you think that Gwadar is getting the required level of attention from Federal government?

Gwadar is not getting the required level of support from both provincial and Federal government. I hope that both governments sincerely develop Gwadar but at the moment there is no reason to believe that will happen.

How you analyze the controversy surrounding the change in route of china-Pak economic Corridor and Gwadar Project?

Politicians belonging from Khyber Pakhtunkhwa (KP) are threatening that if route of China-Pak Economic Corridor is changed then they will oppose it like Kalabagh Dam project. A resolution against this project has also been passed in KP assembly. Parliamentarians of KP demand Economic corridor should pass from the route of Abbotabad-Karak-Bannu-D.I Khan-Zhob-Quetta and Gwadar. One can agree with their suggested route from Abbotabad to D.I Khan because it’s feasible. However, from Zhob to Quetta and beyond is not a feasible proposal for the route of economic corridor. If the route suggested by KP politicians is accepted then it would result in expenditure of a lot of resources and not to mention the prolonged time required for it. Let’s not forget that the terrain from D.I Khan to Quetta and beyond is rugged and it’s extremely difficult to build a trade corridor on it. I am afraid that insistence on the D.I Khan-Zhob-Quetta route will result in failure of the entire project.

The need of the hour is to make the Economic Corridor functional as soon as possible. Only way to achieve that goal is to use the already existing road infrastructure of Sindh and Punjab that only need to be improved. The reason of opposition to the new route of Economic Corridor, from the politicians of KP, is that their province is bypassed. However, if the route suggested by them is adopted then Sindh province is bypassed which will not be liked by people of Sindh. Therefore I think that opposition from KP politicians is absurd and causing a delay in construction of the entire project.

In your opinion what’s the best route for China-Pak economic corridor and why?

In my opinion the best possible route for this corridor is Abbotabad-Mianwali-D.I Khan-D.G Khan-Ratodero-Khuzdar-Turbat-Gwadar. Through this route all four provinces will get the benefits of Economic corridor. Khuzdar will act as a central junction and it’s already connected with Quetta, Zhob and D.I Khan through road infrastructure.  So there is no need to build a new road from D.I Khan to Gwadar.

We also need to understand that India and USA are against this project from the outset. They don’t want China to have an easy and quick access to Arabian Sea and Indian Ocean. Competitor of Gwadar Port will be the Chabahar port of Iran, which has recently been upgraded. Therefore, Gwadar needs to be made functional immediately to ensure its effective competition with Chabahar.

We must not forget that who is investing in this Economic corridor project, Pakistan or China? If it’s China, then they will decide the route and apparently they like Punjab-Sindh route.

How people of Gwadar view the China-Pak economic Corridor project?

In the past, when Gwadar project was initiated, people of Gwadar were deceived and their property was bought at throw away prices. Based on what transpired in the past, people of Gwadar view any project associated with Gwadar port with a reasonable degree of suspicion.

There is hue and cry on the change of route of Gwadar but no one is worried about the people of Gwadar who are living in abysmal conditions akin to medieval times. Both Pakistan and China should ensure the human development of people of Gwadar and take them on board because that’s must for success of this project.