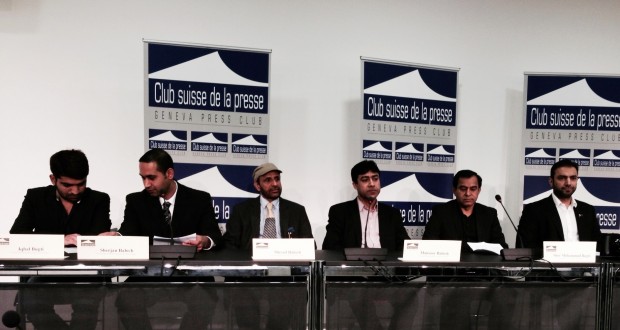 Geneva : Addressing a press conference at Geneva press club on 28 February,the Baloch nationalist leader and head of the Baloch Republican Party Nawab Brahumdagh Bugti  said that  1, 40,000  Baloch had  been  killed and  at least 20,000 Baloch were missing since 2006.

“Balochistan is burning since the forceful occupation by state in 1948. Five major military operations had been launched by the armed forces of Pakistan and the latest of them still continues full-fledged. During this period of 66 years, Balochistan has suffered from gross human rights violations by the Pakistani forces which have been getting worse and accelerated with the passage of every single day.” Said  Nawab Brahumdagh Bugti

Brahumdagh Bugti said that Human rights organizations such as Human Rights Watch and Amnesty International had termed these killings as “Kill and Dump” policy, a policy adopted by the Pakistani state and its forces to literally wipe out the very existence of a nation, the Baloch nation.

He said that mass graves of Baloch are being found  in Balochistan.He informed journalists  that 169 dead bodies were recovered from the mass graves but the number could be much more as the searching and digging was continue when the personnel of armed forces arrived and sieged the area. The discovery of mass grave raised the fears of the families and relatives of Baloch missing persons who have been abducted by Pakistani forces. A large number of family members gathered outside the hospital, where the dead bodies were shifted, to identify if those were of their abducted loved ones but instead of cooperating with them, the Pakistani forces baton charged against them and forced them to leave. He added

“On the question if the dead bodies found in the mass graves were of the abducted Baloch people, the Pakistani government officials responded with blaming it on foreign intelligence agencies as usual. It has become a part of the very root of the Pakistani mentality to blame foreign elements for the misdeeds of their governments and the atrocities of their armed forces against innocent civilians in Balochistan” Nawab Brahumdagh Bugti

The mass grave was coincidentally discovered by a local shepherd a day after the bodies were buried. The bodies were clearly identifiable and were identified as those of Ali Baksh Bugti, Shah Baksh Bugti, Iqbal Mazari, Kohdil Bugti and Khetran Bugti. Kohdil Bugti was a leader of BRSO,a Baloch student organization and all the men were among the 19 people who were abducted during a military operation.

He said “We especially urge the international media to send their correspondents and teams to Balochistan and get access to the war zones of the region and report and expose the war crimes of Pakistani forces committed there on daily basis. If the Pakistani state denies access, then a proper media campaign must be launched to denounce the state suppression of media and masses”