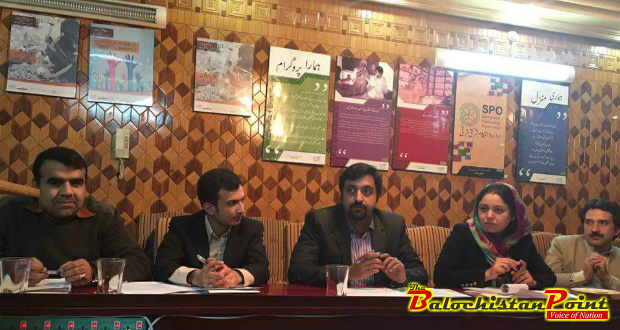 Quetta – 2nd Session of Joint Working Group Meeting of Parliamentarians and Civil Society Organizations was held under the auspices of Democracy Reporting International (DRI) in office of local organization in Jinnah Town Quetta, on Wednesday evening.

DRI has established a Joint Working group with collaboration of Women Caucasus of Balochistan Assembly and Civil Society Organizations. First session of the working group was held in October this year.

Over a dozen members of working group attended the meeting including Member of Provincial Assembly, Spozmai Achakzai.

Leaders of Sub-groups on youth, women and minority presented their points for discussion in the meeting.

Ilyas Inderyum, acting leader of Minorities sub-group, elaborated the issues relating to minorities. He said that joint working group needs to work on issues such as hate speech, biased curriculum and forced marriages of women of minorities.

Zia Khan, leader of youth sub-group, discussed different issues related to youth in Balochistan. “Implementation of Youth Policy is the need of the hour in Balochistan,” Mr. Zia said.

Leader of Youth sub-group also emphasized on the need for career counseling of youth in Balochistan and termed it must for the youth.

New members were proposed and added in all three sub-groups of the joint working group.

Saalem Kakar, Provincial Coordinator of DRI, apprised the participants of the meeting about a proposed Balochistan Multi-Party Summit which is expected to be held in January 2016.

Parliamentarians from all three other provinces would participate in the Multi-Party Summit.

Joint Workgroup meeting was concluded on the note that all sub-groups will hold individual meetings prior to the third session.

Published in The Balochistan Point on December 23, 2015