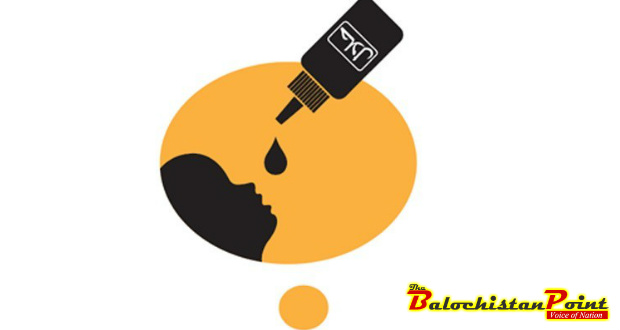 Quetta – The three-day anti polio drive will start in Quetta on Saturday, two days ahead of the Muharram processions.

According to Emergency Operation Center (EOC) Balochistan, all the arrangements have been concluded for the three days Sub-National Immunization Days (SNID) in 12 districts of Balochistan. The campaign in Quetta will start ahead of the two days from other 11 districts—Killa Abdullah, Pishin, Killa Saifullah, Khuzdar, Loralai, Jaffarabad, Nasirabad, Dera Bugti, Lasbela, Sherani and Zhob.

Spokesperson for EOC Balochistan said the three-day drive is aimed at vaccinating over 1.36 million children in 12 districts, including Quetta. As many as 3,320 mobile teams, 357 fixed and 173 teams will be working at Transit Points.

Secretary Health Balochistan Noorul Haq Baloch has said that the campaign will be better than the previous one as Chief Secretary himself will also monitor the campaign.

“The previous campaign in September was comparatively better but we are expecting to improve the quality in this campaign,” he said. “Laxity and no teams will not be acceptable. We are committed to eradicate the polio from Balochistan at the earliest,” he further added.

Published in The Balochistan Point on October 9, 2015