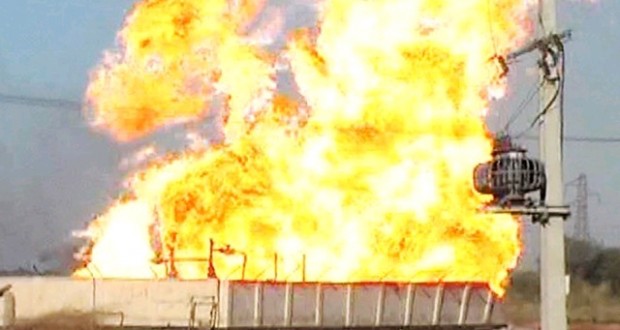 A 16 inch diameter pipeline blown up in troubled Dera Bugti

QUETTA: A 16 inch diameter pipeline was blown up in troubled Dera Bugti district of Balochistan while a man was killed in provincial capital, on Saturday.

According to the details, unknown persons had planted explosive material underneath a gas pipeline, leading to well number 21, in Pir Koh area of Dera Bugti. As a result, the pipeline was damaged and gas supply to the purification plant was suspended.

The authorities concerned have begun repair work on the damaged gas pipeline.

Separately, a man was killed in Pushtunabad, a suburb of the provincial capital, in a firing incident.

According to the reports, unknown armed motorcyclists opened gunfire at a PCO at Khushal Khan Road in Pushtunabad which left a person, identified as Jalilullah, dead on the spot.

Police rushed to the crime scene following the incident and shifted the body to the hospital and later handed it over to the heirs after completion of medical legalities.

Published in The Balochistan Point on July 12, 2014