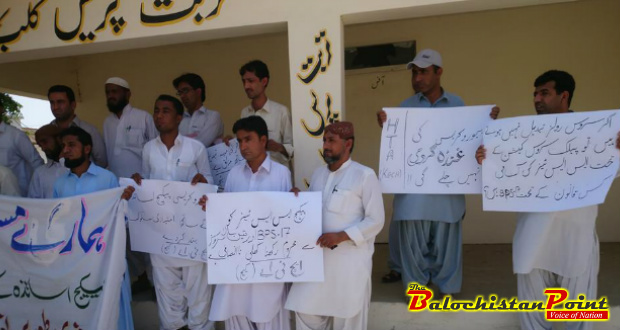 HTA is the association of the teachers recruited under Aghaz-e-Haqooq-e-Balochistan Package.

Protestors were carrying placards that read slogans against bureaucracy for delaying the upgradation of package teachers into BPS-17 scale.

“We are serving in BPS-16 for last three years and government has still not fulfilled its promise of promoting package teachers to BPS-17,” Shah Jahan, President of Kech Chapter of HTA, told Balochistan Point. He further added, “If our demands are not fulfilled then we will intensify our protests.”

Government has not fulfilled the promise of upgrading package tecahers from BPS-16 to BPS-17, even after three years.

Later on, members of Watan Teacher’s Association (WTA) also participated in this protest to market their solidarity with HTA protestors.

Protestors dispersed peacefully after the end of the protest demonstration.

Published in The Balochistan Point on August 25, 2015