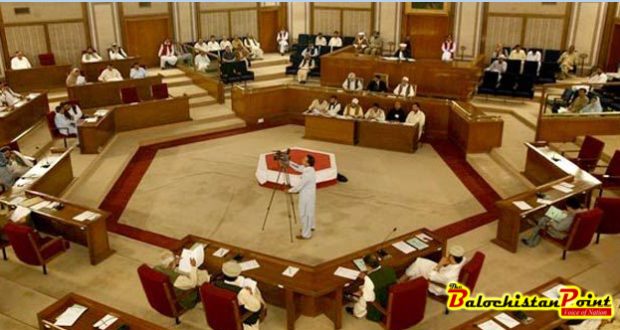 QUETTA: The Session of Balochistan Assembly was held here on Tuesday with member of Panel of Chairperson Yasmeen Lehri following two days’ delay.

Provincial Minister Sheikh Jaffer Khan Mandokhail presented the draft bill of Balochistan Mass Transit Authority which was handed over to the standing committee by the chairperson.

Speaking on the floor of the House, MPA from Jamiat-e-Ulema Islam Sardar Abdul Rehman Kehtran said that NTS test has been made mandatory for the grade four employees also which defies logic.

Majeed Khan Achakzai of Pashtunkhwa Mili Awami said that the thirty five thousand posts which were talked about are still not advertised, adding that all the government employees should be given salaries through biometric system.

Speaking on the occasion, Home Minister Mir Sarfaraz Bugti said that it was decided in a meeting of the provincial cabinet that all the posts up to grade 09 would be handed over to the concerned department, adding if any such decision as mentioned by PkMAP MPA is in place by bureaucracy is regrettable.

Diverting attention towards the street crimes in his constituency, MPA Nasarullah Zehray said that in his constituency Sariab Circle, there were as many as eight police stations but incidents of motorbike snatching and other street crimes are on rise for the past few months, adding that when he talked to the concerned police stations in this regard, they said that they were running short of vehicles and staff and demanded that immediate attention should be paid to this matter. Provincial Home Minister Mir Sarfaraz Bugti said that this is urgent issue and he would not tolerate at any cost, adding that if vehicles and staff are in insufficient number, he would talk to the Inspector General Police on the matter by that day. The matter of increase of fees in University of Balochistan was also discussed in detail by the members and later the session was adjourned until 19th of May.

Published in The Balochistan Point on May 16, 2017