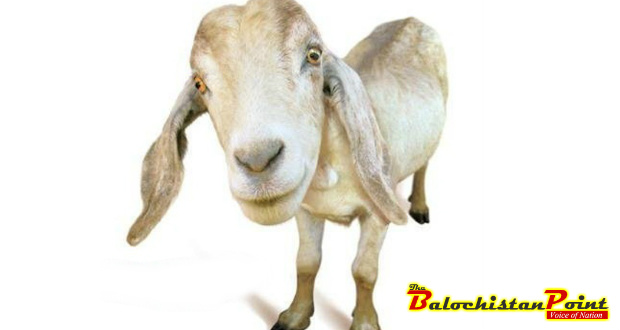 Bakra Eid – A Religious Ritual or Calories to Waste?

Its time of the year when blood pours into black slime of dirty drains, roadside garbage junks are buried under offal, animal skins pile on street corners and the air fills with the mixed stench of animal waste and burning meat. Like many other rituals the annual investment in the hereafter on Eid-ul-Azha sets the stage for our usual sense of absurdity to put on the typical display.

The time of the year when news channels pounce on the easy source of information and air reports such as a goat being sold for 200,000 rupees or a camel with a henna design on its skin, cooking shows describing new experiments to deal with the excessive amounts of meat, animal hide collecting campaigns kick off with fierce and bloody competition and some others get busy in forcing the animals to do something crazy and entertaining for the audience on social media.

More than 8 million animals are slaughtered every year on the occasion of Eid-ul-Azha in Pakistan. Does this investment of billions of rupees in the life after death have a positive impact on the life before? Or is it a way of asking forgiveness for the wrongs in the ancient way of spilling blood?

More than 8 million animals are slaughtered every year on the occasion of Eid-ul-Azha in Pakistan.

With all the due respect I fail to find Qurbani (Sacrifice) from humans in slitting animal throats. If it is the animal that is being put to the dagger for being deep frozen and barbequed for weeks and in some cases months to come what exactly is being put at stake by men? And since people get a return from the money they spend on the sacrificial animals in shape of boost in self esteem coming from beggars who stand in line at their doors, the privilege of being in the good books of the local imam, the favors that the animal skin can earn them from a political party and of course with a lot of meet in the fridge, this can hardly be called Qurbani. In fact, it sounds like a very good deal!

Won’t the divine want us to sacrifice greed, corruption, moral degradation and other evils so rampant in our society? Isn’t the whole idea of sacrifice tweaked and turned into a custom to praise the very same things it was mend to shun? And doesn’t the real essence of sacrifice itself seem to have been sacrificed?

But at least we’ll know what meat we are eating! And those who find themselves at the hospital due to digestion complications have doctors attend at them with their gowns smelling like mutton Biryani. They are the unlucky ones who couldn’t have their names off the duty list on the special occasion. But there are those who did and they contribute to the national craze of celebrating picnics.

Men and women flock on motorbikes, cars and buses towards outskirts of cities to celebrate the festival holidays and to spread the mess where no municipal corporation will carry a post Eid cleaning campaign.

The three day festival draws a craze of waste. A flurry caused by news reports, roadside banners, animal herds blocking the road, temporary blacksmiths setting off stalls decorated with different types and sizes of knives, hey stacks heaped along the road ends with experiments of dealing with the meat, facing problems of digesting it, and for the municipal corporation cleaning the dirt and waste.

The principles of hygiene are also ignored while butchering the sacrificial animals. Millions of animals are slaughtered and skinned in the open air of urban cities causing health issues. The act of slaughtering animals inside houses also has an impact on the mentality of those who witness the act specially children. It is difficult to understand why slaughter houses are not used for the purpose they have been built for.

The idea of helping the poor by distributing meat among them does not make a lot of sense either. A lot of meat turns into waste as most meat collectors lack means of preserving the abundance of it. There are also the smart ones who sell the extra meat for lesser price from the market but that too doesn’t work very well for them as meat becomes the most commonly owned food item all over the country and there are very few who will pay for it.

Meat is one of very essential and valuable sources of food and takes more time and resources to produce. According to International Fund for Agricultural Development (IFAD) it takes 13,000 to 15,000 liters of water to produce one KG of beef compared 1,000 to 3,000 for a KG of rice. It is very important to realize our responsibilities towards fair and reasonable consumption of such valuable commodity and avoid wasting it.

Published in The Balochistan Point on September 25, 2015