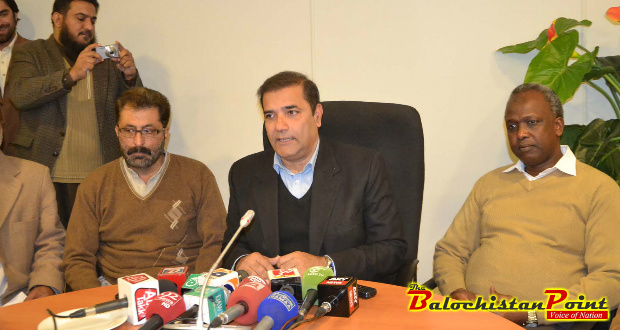 Forthcoming Polio Campaign will target 2,472,616 children administration of polio drops in 30 districts of Balochistan. In this campaign 6,603 polio teams will administer polio drops on 796 fixed sites and 321 transit points. 55,085 children of afghan refugees below five years of age will also be administered polio drops. 88 camps of Afghan refugees would also be targeted in the camping starting from tomorrow.

Number of children to be administered polio drops is determined by polio censuses which are conducted by provincial government on regular basis.

Dr. Saif said that Pakistan and Afghanistan are the only two countries in the world where Polio virus is still threatening children. In 2015, 52 polio cases were reported in Pakistan out of which 7 were reported in Balochistan.

Coordinator of EOC vowed that provincial government will keep on doing its efforts as long as Polio Virus is not completely eliminated from Balochistan.

Discussing the future plans of polio campaign in province, coordinator EOC said that Injectable Polio Vaccines (IPV) will be used instead of oral polio drops to control polio from February onwards.

Chief Minister (CM) of Balochistan chairs the monitoring committee that oversees the polio campaigns in the province. Coordination meetings have been carried out with commander southern command and Frontier corps (FC) to ensure security for polio workers in highly sensitive areas.

Describing the history of polio campaigns, Dr. Saif said that 9 successful campaigns were carried out in Balochistan from September to December. “We have managed to cover 90 percent of the refusal cases in Balochistan,’ added Dr. Saif.

Dr. Saif further said that People from different walks of life are involved in the campaign to make it successful. Capacity and number of polio workers have been increased to make the campaign more effective.

Polio workers of Balochistan are appreciated in the world for their efforts. Fareeda, a Lady Health worker from Balochistan was awarded “Hope for Achievement” award by Bill Gates and Supreme Commander of Abu Dhabi for working against elimination of polio virus in Balochistan.

Polio workers used to face long delays in receipt of their wages and that problems has been resolved now, claims Dr. Saif. Now polio workers are paid to time for the duties that they perform.

Published in The Balochistan Point on January 10, 2016