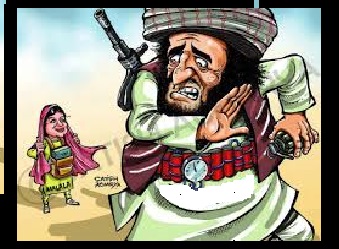 However, few pundits and analysts have noticed another Islamic extremist organization that is forcing schools to abandon educating girls in Balochistan’s Panjgur district.

This terrorist outfit has issued pamphlets warnings all private schools in the district to shut down girls education or to face the consequences. The pamphlets declare female education as haram, an Islamic term referring to things forbidden in Islam.

It is becoming increasingly difficult for parents to send their children to school when the armed men of Tanzeem-ul-Islami-ul-Furqan attacked and burnt a school van of the Oasis School carrying female students in Panjgur on May 14. The students remained unharmed but the attackers beat the school head Major (retired) Hussain Ali. Major was driving female students to school.

Due to the continuous threats, a number of schools and English language centers have already stopped teaching students. The deteriorating security situation shows that now it is difficult for girls to attend schools and colleges in the district. Zahir Baloch, a local educator and founder of the Oasis School while talking toThe Baloch Hal said that all private school owners had decided to shut down the schools for an indefinite time considering the lack of security.

The Baloch nationalists parties have condemned threats to girls education in Panjgur. However Baloch armed organizations struggling for an independent Balochistan, have strongly condemned intimidation of Tanzeem-ul-Islami-ul-Furqan for forced abandonment of female education. They called it another approach to weaken and counter their aforementioned movement, using religious extremism to push the secular and civilized Baloch society toward ignorance and backwardness through use of force.

No doubt Panjgur is known for its quality education in Balochistan and this credit goes to many private schools run by local teachers and administrators. The remarkable ratio of girl’s education in Panjgur proves love and interest of people in education.

We want education. Education is our basic right. Save education

Unfortunately, the ongoing unprecedented resistance and protests of people for the protection of female education has not gained attention of mainstream and international media. The civil society and students have been protesting against the threats and attack on the head of Oasis School. In the recent procession on Wednesday thousands of students, women and civil society members carried out a procession chanting slogans “We want education. Education is our basic right. Save education.”

Threatening education in Balochistan is quite surprising and questionable for the present provincial government that claims to make Balochistan a gate of intellectuals. However, it is worth mentioning that several schools have already been closed after raids of state security forces in Makran region of Balochistan. After the threats to education in Panjgur, the government is still unable to ensure security to girls.

The presence of extremists in Balochistan and their moves against education – mainly girl’s education – is a great menace to the already deprived and backward land of Balochistan. It is undisputed that there is a growing processes of “talibanization” in Balochistan which is the result of the state’s patronization, which the the state will not likely deal with effectively.

However, if more human rights organizations, political parties in Balochistan, and national and international media cover this issue like we have seen with Nigeria’s Boko Haram coverage, we may succeed in rooting out this evil. ( Courtesy : http://www.sharnoffsglobalviews.com)

Yousaf Ajab Baloch is a journalist and human rights defender. He is editor-in-chief of The Balochistan Point, an online English newspaper. He is author of a Book: A Battle Field for Balochistan. Follow Yousaf on Twitter@YousafAjab. Read other articles by Yousaf.