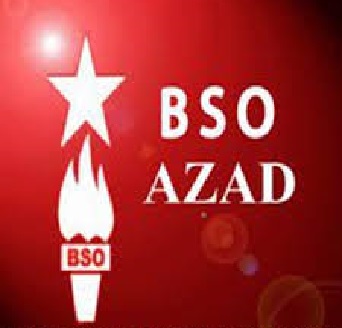 ‘We discourage and strongly reject any form of sectarianism, religious hatred and extremism.’ the spokesman said.

“The night before Baba Marri’s burial, we came to know the family was not allowed to see him and that the state, with the help of Jangyz Marri, had plans to bury Baba in Kohistan Marri against the will of Baloch nation. We initiated contacts with people to organize a mass gathering in front of Quetta Press Club to force Jangyz Marri to handover Baba’s body to us. After succeeding in taking Baba’s corpse, we marched toward New Kahan where Ramzan Mengal reached in one of Jangyz Marri’s jeeps without anyone noticing’ the statement read.”

“As soon as BSO-Azad learned of him leading Baba’s burial prayers, the ASWJ leader was stopped right away and was not allowed to continue further. Instead, another moderate Baloch Imam took over and completed the rest of the prayers.’ the statement cleared.” the spokesman said.

“The state wants to malign the Baloch movement in front of international observers by connecting their own groomed religious fanatics to the Baloch, which clearly is part of state’s dirty game in Balochistan,” the spokesperson said.

BSO spokesperson declared that they believed in everyone’s right of religious freedom and strongly condemned killings of valuable human lives in the name of religion and extremism.