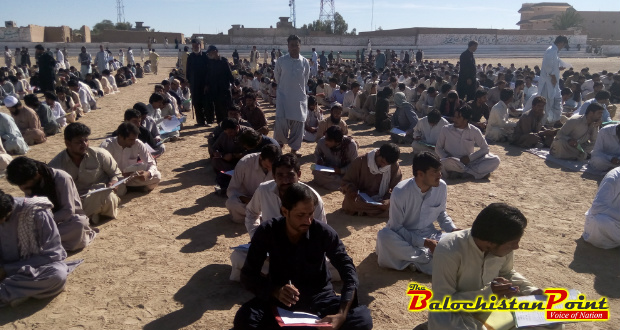 Chagai – Chagai district is facing rampant increase in unemployment as more than 1,000 candidates appeared in recruitment tests of 50 vacancies of Levies force.

Chagai, the most thinly populated district of Balochistan, shares borders with Iran and Afghanistan. Natural resources based Mega Projects such as Saindak Copper-Gold project and Rekodiq project are also situated in Chagai district.

Allegedly nepotism based recruitments are at their peak amid the rampant unemployment in Chagai.

Couple of days back District Chairman Chagai prevented a non-local from assuming charge as a clerk in Local government department who was appointed based on nepotism. District chairman expressed his displeasure over appointment of non-local in small scale jobs of Chagai.

“Locals have been recruited in Public Health Engineering (PHE) only and in rest of department outsiders were appointed who left Chagai after taking charge,” a local citizen told Balochistan Point.

In Saindak Copper-Gold project there are also growing complaints about appointments of outsiders in the project.

Politicians are free to select candidates on political bases and there is no check and balance on the recruitments –  a resident.

Muhammad Arif, a resident of Dalbandin told Balochistan Point that he has been applying for levies force posts for last 3 times but still failed to get any post because there is no merit. “Politicians are completely free to select candidates on political bases and there is no check and balance on the recruitments,” he added.

The unemployed youths also have concerns over delaying and cancellations of posts in different government departments. They were hopeful when current provincial government announced posts of several departments but later cancelled rest of them one by one.

Official sources claim that the posts of federal levies force have been delayed due to political dispute arising on the allocation of the posts between different districts of Balochistan.

It’s feared that rampant unemployment coupled with nepotism based recruitment can push youths of Chagai towards disappointment and ultimately towards violence and extremism.

Published in The Balochistan Point on October 28, 2015