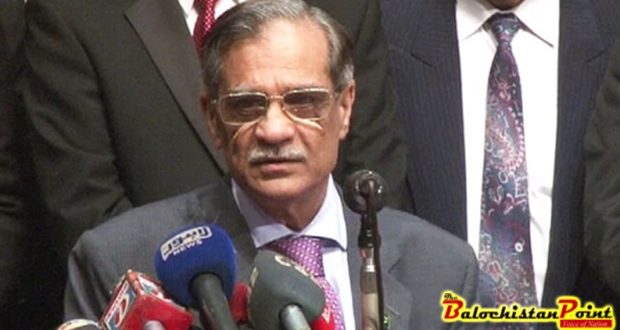 ISLAMABAD: The Chief Justice (CJ) Mian Saqib Nisar on Monday issued strict directives to the federal government after expressing grave concerns on the measures being taken to control population growth in the country.

Reportedly, the apex court came down hard on health secretary captain (Rtd) Zahid Saeed after resuming the case pertaining to curb population growth. The health secretary admitted that the department could not devise and implement effective measures regarding population control.

Meanwhile, the CJP remarked “how could surveys be done while sitting in offices?”

Subsequently, the court ordered him to submit progress report on the matter every three months and adjourned the hearing till tomorrow (Tuesday).

“We will announce the judgement tomorrow,” the CJP said.

Earlier on January 3rd, the top judge said “This issue is far bigger than the need of dams,” adding that advertisement launched by the government was not enough to control the population, and instead an “Action Plan” was required.

“National issues cannot be curbed without controlling the rapid increase in population,” he said, adding that state’s resources have been depleting fast, and the land available for agriculture has been shrinking.

Besides, the attorney general had also informed the bench that a digital media run awareness campaign was underway, and sought more time for implementation of certain effective measures in this regard.

Health secretary had informed the bench that two of the provinces have already formulated population control programmes.