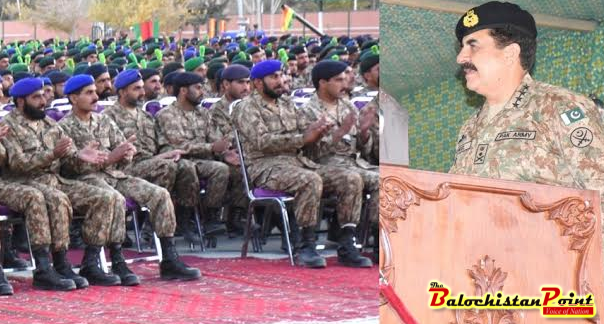 COAS said that the people of Balochistan had clearly rejected foreign sponsored terrorists and helped the state in busting their network. While paying glowing tributes to the officers and soldiers of Southern Command and Frontier Corps, COAS said now that the tide in Balochistan has been turned against terrorists and their sympathisers, and large number of Ferraris was surrendering, we will continue to work with the provincial and federal government towards greater security and stability.

He said, as COAS, security and assistance to civil government in institution building and development work in remote areas has been his priority which brought him to Balochistan almost every month. COAS commended Southern Comd for managing an arduous task of construction of over 1000 KM long road network in the rugged and hostile terrain by FWO and NLC which helped in operationalisation of CPEC in a stipulated time frame.

COAS said that Gwadar port and CPEC will usher into new era of hope and prosperity for the area with dividends reaching a common man. He also appreciated Southern Command for reintegrating youth by their mass induction into FC/Army, rehab of earthquake hit Awaran and training of 6000 policemen and levies. He also appreciated the improvement in Management of long and treacherous border with Afghanistan and Iran which has helped improve overall security situation in the province. Earlier on arrival at venue, Lt Gen AamerRiaz, Commander Southern Command and Maj Gen SherAfgun, IG FC Balochistan received COAS (Press Release)