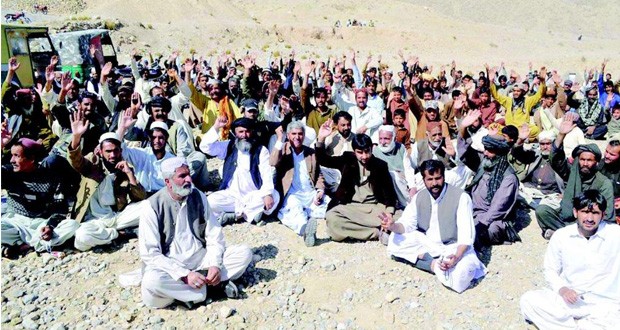 Quetta – Members of civil society and Political activists held a sit-in on western bypass against attempted land grabbing of Jabal-e-Noor graveyard, on Saturday.

Protestors alleged that Land Mafia in collusion with Quetta Development Authority and District Administration is attempting to grab the land of Jabal-e-Noor graveyard in pretext of Shifting Spini Road Bus stand.

Balochistan High court has ordered that this land should be reserved for graveyard, claimed the protestors.

Baloch tribes have donated this land for Jabal-Noor graveyard and all attempts to grab this land will be vehemently opposed, assured the participants of the sit-in.

This is an undeniable fact that Land grabbing under government patronage has increased since current government has assumed power. Few weeks ago, a school on Quarry Road Quetta was also occupied forcibly by land mafia associated with a government party.

Later, protestors dispersed peacefully but vowed to fight the land grabbing of graveyard to tooth and nail.