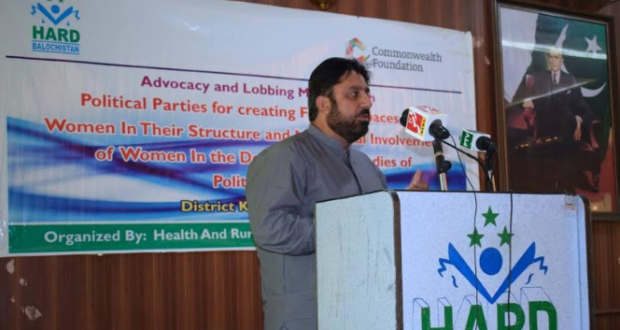 Khuzdar: A delegation comprising of  civil society, Informal District Assemblies and volunteers demanded the immediate resolution of major public issues within the district from Mir Younus Aziz Zehri  (Member of Provincial Assembly) while an advocacy with him at guest house Khuzdar.

The delegation led by Miss Tabsum Nadir submitted a charter of demand to the MPA with the following demands:

Mr Mir Younas Aziz Zehri (Member of Parliament) appreciated the role of civil society and Informal District Assembly on exposing women problems and the joint of efforts of HARD Balochistan and civil society. He fully endorsed the demands present by the representative of Civil Society and IDA and declared all the demands legitimate and rationale. He promised to put all these demands before the Balochistan Cabinet in its forthcoming session and also promised to pursue these demands at all levels.

Published in The Balochistan Point on November 20, 2018