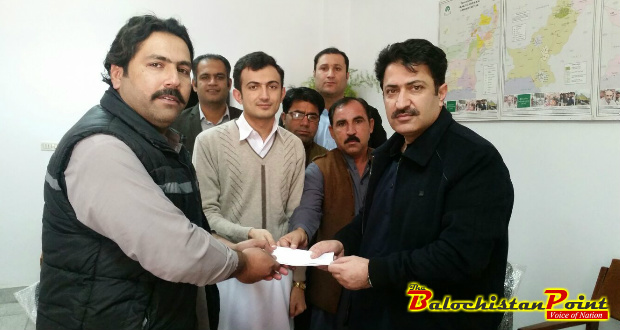 Senator Shehbaz Durrani, on behalf of CM Balochistan handed over an open cheque of 1 million rupees to team of Civil Society Balochistan for Hajira.

Hajira is a 13 year old girl, who belongs from Kharan district and suffers from acute myeloid leukemia which is a type of blood cancer. Hajira is under treatment in Aga Khan University Hospital (AKUH) and more funds are required to continue her treatment.

Civil Society Balochistan along with Quetta Online volunteers group started a fund raising campaign for Hajira back in December. In that campaign, Senator Shehbaz Durrani on behalf of Nawab Sanaullah Zehri committed to donate 1 million rupees.

“We are immensely thankful to Nawab Sanaullah Zehri for helping out the cancer patient who belongs from an under-privileged family,” Sami Zarkoon, Convener of Civil Society Balochistan told Balochistan Express.

Mr. Zarkoon also thanked Senator Shehbaz Durrani for taking time out of his busy schedule to handover the cheque of donation for Hajira.

Expressing his optimism, Mr. Zarkoon said, “we hope both Mir Khalid Langove and Agha Muhammad Raza make good on their promises and submit the donations, that they have committed, directly to AKUH.”

Published in Balochistan Point on January 18, 2016

2016-01-19
Editor
Previous: No Drinking Water in Gwadar Should Open the Eyes of Rulers: Sadiq Umrani
Next: Balochistan Conundrum in Backdrop of CPEC