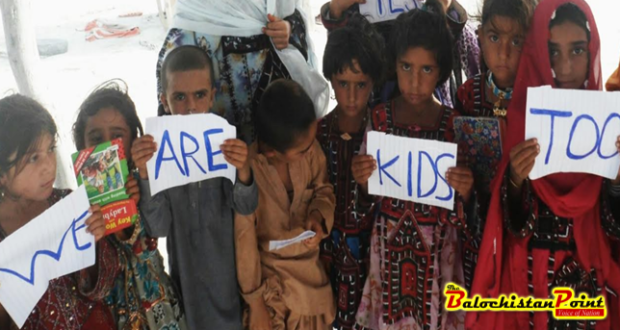 Clipped Wings: Exploring the lives of Young Girls in Kulach

During the hot and humid summer of 2013, I had the opportunity to visit my native village of “Beelar, Kulach” roughly 85 kilometers from Gwadar. Right after ten kilometers from Gwadar city-center, one would find nothing but barren plains, arid road sides, sandy winds and an open sky that somehow flows in my eyes with light clouds and harsh rays of sun. It’s often hard to predict anything when traveling on these unending roads. There’s nothing but hope.

With a hope to see something new, I was excited to meet little Kulachi girls in the village after a journey of about an hour and half. We might had reached earlier though, if there were not so many bumps in the roads. Not roads, I would rather name them “Bumpy Sand and Stone paths” which are somehow the only options to get there.

As we reached, I looked around. The vast dry plains with little mud huts, those little girls carrying woods on their heads, some with sticks in hands leading the herds of goats, several women sitting in front of the huts in a pattern and embroidering colorful fabrics, few petite young girls carrying little undernourished babies, one or two girls cooking food with wood-fire, some with fetchers of water “Mashk” walking far in the plains and enduring the freedom of nature and harshness on the other end.

“Is this is how girls spend their days in Kulach in twenty-first century, a village so near to the so-called port city?” I questioned myself, for this was exactly the way my great-grandmother spent her days in the same plains perhaps in 1930s. I questioned myself again, “How come nothing changed in the eight decades? Did clock stuck at one point in Kulach and no one bothered to fix it?”

“Time freezes!” I assumed. “But there are poor prospects of this notion. How could it freeze for this part of the world, particularly for young girls while rest of the world enjoyed the delights of development and globalization?”

As a resident of the so-called emerging port city, I invariably felt deprived for not having a girls’ college, a university, hospitals and of course water during the three crises we experienced, yet my woes were merely trifling matters compared to the ones I witnessed in Kulach.

Young girls in Gwadar, Turbat, Panjgur or Khuzdar; whether haven’t been as privileged as the girls in semi-urban or urban areas of the country. However, they at least have something through which they can get innovative and create opportunities for themselves; if not all, at least a few.

Today on the International Day of the girl child, when I recall the day spent in Kulach with the girls, unaware of the charms of a better life standard, I find myself with the question, “What was there for the girls living in Kulach? “Hope.” I often reflect, but I couldn’t ultimately foresee any.

My unrealistic hope reminds me each day that Balochistan yet has a long way ahead to achieve basic human rights before campaigning for equal rights for young girls and women. Social barriers can not only be blamed for creating limitation for girls when there is dearth of basic resources for life. Not only in concrete sense, but social indicators are completely absent even in abstract sense there.

Having more than three-fourths of population without basic literacy skills with larger number of women and girls, almost each family lives below poverty line and due to early marriages roughly one out of every five married young girl dies during childbirth or suffers from obstetric fistula.

These are merely few distinctions of life, girls spend in Kulach, there can be hundreds of other latent factors contributing to the miseries of girls with distinct faded dreams, clipped wings and struggle for simply staying alive without little awareness about the world.

Seemingly concerned with the miseries of girls, we often hear notions like “Don’t clip their wings,” by different humanitarian organizations but for the girls in Kulach, I often ask myself, “Are there any wings to be clipped?”

Published in The Balochistan Point on October 11, 2016

2016-10-11
admin
Previous: Letter: International Day for Disaster Reduction in Pakistan
Next: Letter: The education policy is required to be reshaped