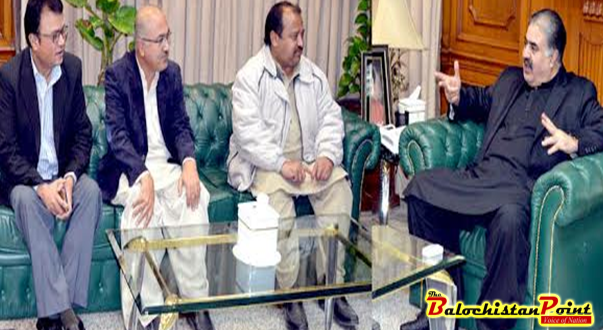 Talking to a delegation of newly elected- body of Balochistan Union of Journalists (BUJ) led by its president Khalil Ahmed, General Secretary Ayub Tareen, Rasheed Baloch and Irfan Ahmed on Wednesday  he said that they believed in free media and would always welcome positive criticism on the part of media and hoped that the newly elected body of BUJ would work hard for the welfare and well-being of journalists.

Felicitating newly elected body of BUJ, Chief Minister said that Media could  also play a significant role in providing guidance for reforming the society and bringing the province out of its current problems.

Chief Minister Balochistan, Nawab Sanaullah Khan Zehri categorically stated that nobody would be allowed to play with the lives of people and warned tit for tat action would be taken against elements involved in business of substandard food and spurious medicines. “We have committed to root out the evil trade of forged medicines and substandard food from the province,” he asserted.

He said that quality medicine and standard food is the right of every citizen and the Balochistan government would leave no stone unturned in ensuring this right.

He said that Balochistan Food Authority would be made more effective to curb selling of poor quality food and directed whole Deputy Commissioners for taking stern action against elements involved in this filthy business.

Earlier, BUJ delegation informed Chief Minister about issues faced by journalists and requested for early approval of Journalist Welfare Fund, land for housing scheme and provision of compensation announced for journalists died and injured in the line of duty. BUJ president also invited Chief Minister to participate as chief guest on oath taking ceremony of newly elected body of BUJ.

Chief Minister assured the delegation of BUJ that their genuine issues would be addressed on priority basis.

Published in The Balochistan Point on February 1, 2017