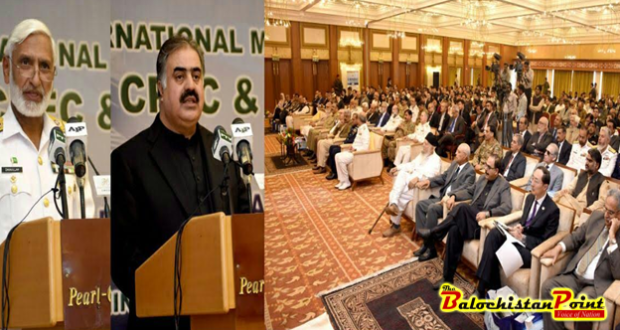 CPEC has laid foundation of rapid development and prosperity in the country, Says CM Balochistan

“The whole region including Pakistan will get productive benefits of the mega project,” he added.

CM Balochistan said, “CPEC will be the game changer and bring prosperity, growth, development in the country and also bring valuable innovative opportunities for the country and the entire region will get maximum productivity.”

In addition he said that Balochistan government by the cogent coalition support of the security forces and the general public brought peace, law and order situation in the province become improved.

In like manner he said, “The concept of “One route-one belt” by the Chinese is an envisioned approach that is going to be result oriented, this project of CPEC is one of the main thematic areas of OBOR”.

In the viewpoint he said “Under the CPEC initial phase many projects are near to completion or are completed, that includes the construction of Gwadar airport at the cost of $250 million in progress and will be completed in 2019.”

Adding more, he said that National Highway Authority is constructing 100kms long Besima-Khuzdar road network.
“Linking Gwadar with the rail network feasibility work is under process. Other projects include Gwadar safe city project, China foundation for peace Faqir colony Gwadar has been built and the land was donated by the Balochistan people. Improving the security of CPEC a new security division has been approved by the federal government.” He added.

On the occasion Naval Chief briefed the participants about the preparedness, opportunities and available options In the Pakistan Navy.

Published in The Balochistan Point on December 13, 2016

2016-12-14
admin
Previous: Women must learn some other skill along with their education: Speaker Balochistan Assembly
Next: France is desirous of making investment in energy sector in Balochistan: Ambassador