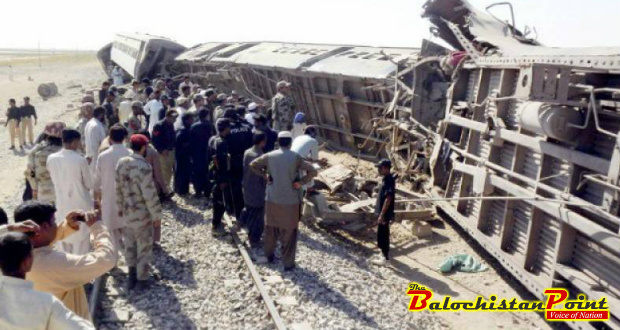 Culture of Impunity and Apathy in Balochistan

In the last eight days Balochistan has witnessed two deadly accidents. On 12th November, Dr. Yaseen Baloch, Secretary General of ruling National Party died in a road accident near Uthal town. On 17th November, Jaffar Express derailed form the railway rack near Aab-e-Gum and resulted in deaths of 19 passengers with over 100 being injured. These two were not the first accidents of their sort and will most certainly not be the last due to a culture of impunity and apathy in the province.

National highways of Balochistan have become very dangerous for passengers in the last few years. In 2014 alone, over 240 people died in major road accidents in national highways of Balochistan. However, no one has been held accountable for the loss of lives on multiple occasions and the accidents have been ignored as acts of God. Nobody in the concerned quarters has even blamed the government departments responsible for these issues which are National Highway Authority (NHA) and National Highways and Motorways Police (NHMP). Due to the apathy of political leaders of Balochistan, NHA and NHMP have also not showed any interest in making the highways safer.

In the past, the most common cause of train tragedies was act of sabotage carried out by the insurgents in the province. However, this was the first time that 19 precious lives were lost due to flaws in the obsolete system of Pakistan railways. Railway tracks had been laid in Balochistan over 150 years ago. Given the rugged and unfriendly terrain of Balochistan, railway tracks have become obsolete and perilous for passengers. But who cares about potential loss of lives in accidents in a province where security situation has resulted in killings of hundreds of people?

Clearly, officials of Pakistan Railways are responsible for the train tragedy that took the lives of more than a dozen people. An inquiry is underway, conducted by Pakistan Railways itself. Knowing the track record of such inquires, it would be a mere formality. Driver of the train, who died in the accident, will most probably be held responsible. That will be the end of the inquiry and the real culprits within the Pakistan Railways will go scot-free due to the prevailing culture of impunity.

Moreover, the deceased Dr. Yaseen Baloch was one of the most important leaders of the ruling NP. In the aftermath of his tragic death, NP declared a three-day mourning period. They also held a political gathering to pay tribute to Dr. Yaseen and that’s that. Now, everything is back to normal routine for NP and they don’t even harbor the thought that something should be done to prevent the deadly road accidents that killed their General Secretary. NP leaders are more interested in palace intrigues to prevent a change of power in Balochistan which is scheduled in December this year as per Murree Accord.

This is not the first time that deadly accidents like the ones mentioned above have taken place in Balochistan. However, no action has been taken whatsoever to prevent any such accidents in future. In fact, the government of Balochistan has literally adopted the policy of waiting for future accidents and doing nothing other than issuing condemnation statements or declaring mourning periods.

In order to avoid such catastrophes in future both rail and road infrastructure needs to be overhauled on war footings. Railway tracks have become obsolete and their continuous use would be tantamount to jeopardizing lives of passengers in each and every train journey. What needs to be done is to work on replacement of the railway tracks as soon as reasonably possible. Secondly, officers of railway Pakistan Quetta division, whose negligence caused the particular incident of this week, must be identified and brought to book.

Moving to road accidents, NHMP must increase its vigilance. It needs to station more of its personnel on dangerous highways of Balochistan, especially in Lasbela district. The NHMP personnel should take action against the drivers involved in over-speeding and overtaking in contravention of highway rules. NHMP has to take strict measures to enforce its writ on highways of Balochistan to reduce the frequency of accidents.

Moreover, the most important thing that should be done to make travelling safer in the province is introduction of two-lane highways. At the moment, all highways in Balochistan are one-lane roads and that’s a major cause of road accidents. NHA and Balochistan government must start work on converting all national highways to two-lane roads. That would require great amount of resources, but since Balochistan government is already wasting billions of rupees on meaningless projects then why not spend on a meaningful project?

Published in The Balochistan Point on November 22, 2015