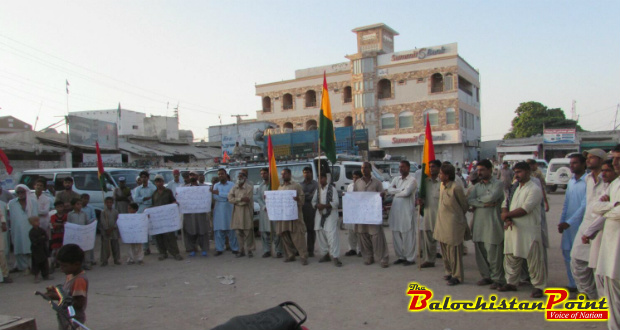 BNP leaders made these comments during a protest demonstration held at Mullah Fazul Chowk this Wednesday against the projects that Dr. Malik introduced for Gwadar during the last two and half years of his government.

Leaders of Balochistan National Party protested in backdrop of the recent visit of CM Balochistan to Gwadar.

BNP representative from Gwadar, Hussain Wadela, addressed the protesters and said, “Dr. Malik did nothing but implemented some failed projects for Gwadar that too for his personal interests.”

The leaders of BNP accused Chief Minister for prioritizing his personal interests over the public interest of people of Gwadar. They pointed out few projects that Dr. Malik specifically designed to benefit himself and his party members:

National Party conducted a seminar this Monday to legalize the plots of Shambay Ismael area for the local owners.

According to the BNP members, the legalization of Shambay Ismael area plots was merely a game that CM and his party members played to legalize their own plots that they had illegally occupied.

Asserting the burning issue of water crisis, the BNP leaders blamed the ruling party for their failed project of Desalination Plant which has already crossed a billion rupees of investment. According to them a project that exceeds limits of the provincial budget, is indeed not a sustainable solution.

Considering Mirani Dam as a permanent solution for the water crisis, BNP leaders accused CM for exploiting the Mirani Dam for agricultural purposes for his own region of Kech, where as initially Mirani Dam was constructed for Gwadar port.

BNP Leaders opposed the inclusion of Member of Provincial Assembly and representative of BNP in Gwadar, Mir Hammal Kalmati, without his consent in the committee for solving desalination plant issue created by National Party.

They declared that Mir Hammal has never been a part for the approval of this project. Now as the failure of the project has already been predicted, the ruling party shifts the blame at BNP for their negligence and fault.

Addressing the issue of GDA School that has not yet been solved, the leaders of BNP alleged that the failure of the school is a result of political involvement.

More than half of the employees don’t belong to Gwadar and the outsiders don’t have any sympathy with the school and the students. The skilled lecturers are compelled to leave and locals are terminated, as they said.

Ignoring the Only Degree College of Gwadar

“The only college of Gwadar that too without lecturers is left out of site because there’s no personal benefit related to it,” said Ismail Omar the organizer of Balochistan Student Organization (BSO) in Gwadar.

He added, “Degree College will soon be demolished for the Express Way, and there’s no plan for any boys college yet and the construction work for the girls’ college that was planned for last year has not started yet.

“Where will students go for college now?” questioned Ismail Omar during protest.

Raising the issue of the habitants of Wadi Dohr, BNP leader Hussain Wadela stated, “The people of Wadi Dohr are not ready to sell their ancestral lands where they don’t only live but work on salt production, although they are being forced to do so.”

He claimed that the people of Wadi Dohr are not being paid enough to afford another land and construction work, they are ready to give their lands for lease but not to sell.

BNP leaders promised to stand with the people of Gwadar and Balochistan and stated that they favor developmental projects too but for public interests. They assured to raise the issues that are outcomes of the ruling party’s governance in the Provincial and National Assembly.

Published in The Balochistan Point on October 16, 2015