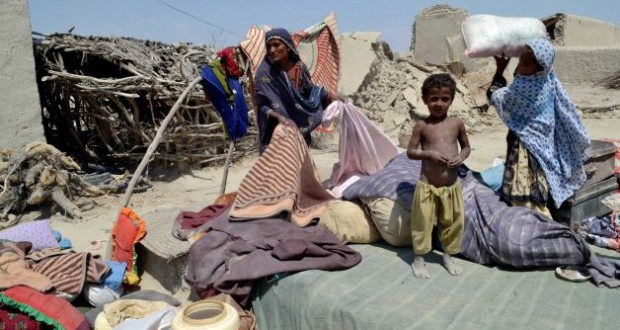 Apart from human made disasters,   Balochistan is again and again confronting deadly natural catastrophes.  24th  September’s earthquake once again   shocked Balochistan as 7.8-magnitude earthquake   hit Balochistan’s the  most backward district Awaran, where Thousands  of houses collapsed to ground and countless  partially damaged. Due to the collapse of mud-houses more than 1000 people are feared dead. The officials have confirmed death of more than 500 people in the area. Though, the government claims to have initiated relief activities, however, the ground realities and independent media reports and reports of None Governmental Organizations N.G.Os go against the claims of government.

On 28 September the second a powerful earthquake shocked Awaran with 7.2-magnitude, killing 25 people on Saturday.  The US Geological Survey measured the earthquake at 6.8 on the Richter scale; the new quake struck the remote district of Awaran at a depth of 14 kilometers at 12:34 pm (PST). According to the Zahid Raif, director of the National Seismic Centre of Pakistan, “It was not an aftershock, it was an independent earthquake,” The Deputy Commissioner of Awaran, Abdul Rasheed Baloch confirmed that quake destroyed hundreds of mud houses in the Mashkay and lot of people had been trapped under the rubble.

Currently, all the affected people are in dire need of assistance. The victims are suffering from injuries and absence of health facilities. There is lack of male and female doctors in the area. Absence of  shelter, clean drinking water and food are creating more hurdles for the earthquake victims in the area. The sufferers are mostly women and children or aged people, and lack of facilities can cause diseases and death of children. The local affected communities claim for not receiving any relief from the government in far flung areas of Awaran district. However, it has also been observed that most of the villagers in the areas are not willing to take help by forces. Those organization or group of volunteers who reached Awaran to assist earthquake victims, blame that the aid commodities have been taken by forces, saying that forces would distribute them.

Provincial Disaster Management Authority PDMA and NDMA are unable to provide relief goods and shelter and government is not ready to accept its failure in assistance.  Keeping in view the past experience once again Balochistan is being neglected.  Except local media, BBC   and Baloch online newspapers, the mainstream media are only interested in newly created Island in Gwadar.  The media has not exerted extraordinarily to enlighten the devastation to pressure state authorities for the support of the affected population.

It is beyond ones understanding why the state is afraid of allowing None Governmental organizations N.G.Os, and International Organizations to initiate relief activities in the  earthquake devastated areas of Balochistan. Having seen the destruction and death toll in Awaran, Pakistan should have called for International support but not only it is not allowing international aid but also the local volunteers and Balochistan based organizations are not permitted to help victims in Awaran.

There could be any accusation of not permitting  NGOs and no call for International aid if there had  been  any threat  from  Baloch militant organizations but the Baloch militant leader Dr. Allah Nazar in his media talk welcomed help  of International  and private organizations. Dr. Allah  Nazar, a former student leader who is now often referred to as Balochistan’s most wanted rebel, said that the workers of private, non-government organisations or international bodies, such as the United Nations, would be welcomed by the rebels. They have nothing to fear from the side of the rebels, he assured, adding that there will be no attacks on civilian convoys. A military official in Awaran also confirmed that the rebels are only attacking security forces and not civilians.

Dr. Allah Nazar claimed that dozens of relief-carrying vehicles were being stopped between Quetta and Khuzdar, and the military was not allowing any private efforts and insisting that they will do it themselves. “Sixty-five thousand houses have been destroyed, there are over a 1,000 dead,” he said. “This is a human tragedy of massive proportions. The area’s entire infrastructure and economy has collapsed.

It goes without saying, the people in Awaran have bitter experience of military operations on their populations and a large number of youth from this area have been forcefully abducted, killed and dumped. Therefore, existence of military in a huge number not only upsets the population but also creates hurdles for already disturbed communities.

It is need of time the forces should allow NGOs and international organizations to help victims because in the limited facilities and assistance government cannot cope with this calamity and only international assistance can reduce sufferings of the affected population. Delay in helping Awaran can cause an immense crisis in the region.

Published in The Balochistan Point on September 30, 2013