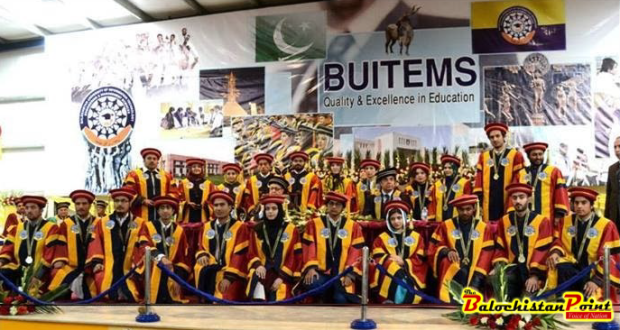 Editorial: The Trend of “Visiting Lecturers” In BUITEMS

Provision of quality education has always remained a major issue in Balochistan, since  University of Balochistan (UoB), Sardar Bahadur Khan Women’s University (SKB), Balochistan University of Information Technology, Engineering and Management Sciences (BUITEMS) in capital city of Balochistan, have not been able  to give the standard education required in the university level. There are number of reasons, causing poor quality education, however, one of them can easily be observed and judged in BUITEMS in appointment of non-professional lecturers, which is known as appointment of “Visiting lecturers”.

The Balochistan University of Information Technology, Engineering and Management Sciences (BUITEMS) was chartered in 2002 and it is known as a public research university in Balochistan. BUITEMS offers undergraduate and graduate programs in its five faculties in 32 disciplines.

The University was established to open opportunities of learning to the deprived students of Balochistan. People had much expectation from BUITEMS for acquiring quality education in Engineering, Applied Sciences and Management Sciences; however, this institution has failed to play the role expected from it. The claimed motto of the institution is “Quality and Excellence in Education but since 2006 it has deviated from its lofty slogan.

It is well established fact that present administration has focused only on making more buildings and beautifying the campus. The beautiful structures might make the University look good, but it cannot give quality education to the students, which is the fundamental motive of any educational institution because only qualified tutors can fulfill this task.

Unfortunately, the institution which has more than 8000 students is being run by large number of non-professional lecturers. The University’s administration has selected a good substitute for them, as “Visiting lecturers”. It has been a decade that administration conducts test followed by interviews. But, most of the candidates, who pass the test, they are dropped in interviews and the posts remain vacant and then this vacuum is filled by visiting lecturers. The main reason of this unhealthy practice might be to save revenue. For example, the administration has to give full salary to the candidate who qualifies the test and appointed permanently but a non-permanent teacher gets a meager salary. Though, this practice saves the budget of the University, it is ruining the quality of education and future of the students which is a symbol of administrative folly not wisdom.

Most of the candidates appreciate administration for taking a wise step in 2014 by giving the responsibility of conducting test to National Testing Service. It is laudable, as it ensures transparency and eliminates chances of nepotism. Considering the standard of education in Balochistan, clearing NTS test is not an easy task.  Regardless of weak educational background and lack of opportunities, some candidates still pass this insurmountable test by dint of sheer hard work, which is commendable. The administration of BUITEMS should appreciate and encourage the candidates for qualifying this difficult test, but reverse is the case.  The candidates are rejected by the administration in the interview stage and most of the vacancies as usual are filled by temporary lecturers.

It has been observed that number of students who scored 60 plus, they have been rejected. The candidates, who have been applying for lectureship in BUITEMS, blame that the results of visiting lecturers have been worse, as majority of them scored 30 plus marks in the last two tests. The questions of qualified candidates remain unanswered when the authorities reject candidates scoring 60 plus and allow visiting lecturers with low score to teach in the prestigious institution for almost a year.

Another discouraging move took place when a test for the recruitment of lecturers was held in the November of last year. Some candidates cleared the test, but even before calling them for demonstration; the administration re-advertised the posts in the national dailies. Higher authorities should ask why the posts were re-advertised without interviewing the qualifying candidates.

It seems, once again in 2016 the decades old trend of visiting lecturers will last in BUITEMS, because the classes of spring semester have started and in some departments, there is dire need of lecturers but still the administration has not called the candidates for interviews. The extension in the service of current VC has also increased concerns among the aspiring candidates because he is known as the founder of “Visiting Lecturer” idea trend.

BUITEMS administration and HEC have to come up with a productive policy to end injustice to the qualifying candidates and ensure quality education. The trend of “Visiting Lecturers” will never help BUITEMS’ vision come true for being among the leading universities of the world. Just revenue generation and saving income will never materialize commitment of the institution to equip students with the art of living as productive members of society, contributing to the socio-economic uplift of Balochistan.

Published in The Balochistan Point on April 03, 2016